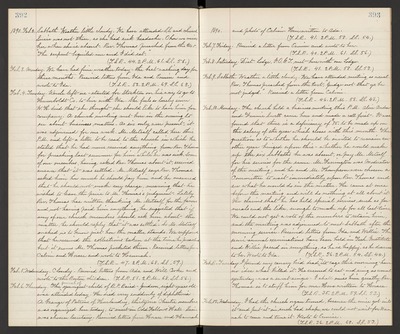 Feb. 4. Tuesday. Uncle left us - started for Stockton on his way to go to Humboldt Co. to live with Ida. She feels so lonely since W.H. died that she thought she should like to have him for company. A church meeting met here in the evening to see about business matters. As six only were present, it was adjourned for one week. Mr. Metcalf called here this P.M. and left a letter to be read to the church in which he stated that he had never received anything from Rev. Thomas for preaching last summer for him while he was sick. Some of our members, having asked Rev. Thomas about it, received answer that it was settled. Mr. Metcalf says Rev. Thomas asked him how much he should pay him and he answered that he should not make any charge, meaning that he wished to leave the price to Mr. Thomas's judgment. Lately Rev. Thomas has written thanking Mr. Metcalf for the favors and not having paid him anything, he suggested that if any of our church members should ask him about the matter, he should reply that "it was settled". So Mr. Metcalf wished us to know just how the matter stands. we supposed that he received the collections taken at the time he preached but it seems Mr. Thomas pocketed them. Received letters from Calvin and Horace and wrote to Hannah. (T.S.R. 47. 2 P.M. 68. S.S. 59.)

Feb. 10. Monday. The church held a business meeting this P.M. Alice Andrew and Fannie Swett came here and made a call first. It was found that there is a deficiency of $75. to be made up on the salary of the year which closes with this month. The question as to whether he should be invited to remain another year hinged upon this - whether he would make up the six Sabbaths he was absent, or pay Mr. Metcalf for his services for the same. Mr. Farrington was Moderator of the meeting, and he and Mr. Thompson were chosen a Committee to wait immediately upon Rev. Thomas and see what he would do in the matter. He came at once before the meeting and will do nothing at all about it. He claims that he has held special services, such as funerals and the like, enough to make up for all lost time. We could not get a vote of the members to retain him, and the meeting was adjourned to next Sabbath after the morning service. Received letters from Ida and Willie. The semi-annual examinations have been held in Tech. Institute and Willie passed in everything, so he is happy, as he deserves to be. Wrote to Ida. (T.S.R. 36. 2 P.M. 54. S.S. 44.)