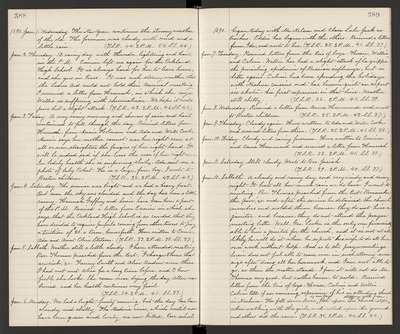 Jan. 2. Thursday. A rainy day, with thunder, lightning and hail in the P.M. Eunice left us again for the Oakland High School. It is always hard for her to leave home, and she goes in tears. It was such stormy weather that the Ladies Aid could not hold their Annual meeting. I received a letter from Hannah, in which she says Willie is suffering with rheumatism. we hope it will prove but a slight attack. (T.S.R. 43. 2 P.M. 46. S.S. 43.)

Jan. 3. Friday. A very rainy morning and showers of rain and hail continued to fall through the day. Received letters from Hannah, from Annie Holman and Ada and Will Cooke. Annie says her mother cannot use her right arm at all or even straighten the fingers of her right hand. It will be indeed sad if she loses the use of her right arm. In bodily health she is improving slowly. Ada sent me a photo of baby Robert. He is a large, fine boy. I wrote to Boston children. (T.S.R. 38. 2 P.M. 43. S.S. 43.)

Jan. 4. Saturday. The sunrise was bright and we had a heavy frost. But soon the sky was clouded and the day has been a little rainy. Hannah Geffroy and Susie have been here a part of the P.M. Received a letter from Eunice in which she says that the Oakland High School is so crowded that they have decided to require pupils coming from other towns to pay a tuition of $20. a term, henceforth. Have written to Eunice, Ada and Aunt Olive Stetson. (T.S.R. 33. 2 P.M. 38. S.S. 37.)

Jan. 5. Sabbath. Weather still a little cloudy. I have attended meeting. Rev. Thomas preached from the text, "I charge those that are rich", &.c. Fanny Swett and Alice Andrew were there. I had not met Alice for a long time before, and O how feeble she looks. She came near dying the day Allen was buried, and her health continues very frail. (T.S.R. 34. 2 P.M. 41. S.S. 37.)

Jan. 6. Monday. We had a bright, frosty morning, but the day has been cloudy and chilly. The Maderia vines, which until now, have been green and lovely, are now killed. Our school

Jan. 7. Tuesday. Received letters from the trio of boys - Horace, Willie and Calvin. Willie has had a slight attack of "la grippe" - the prevailing epidemic of Russian influenza, but is better again. Calvin has been spending the holidays with Nashua cousins, and has become quite an expert ice skater - his first experience in that line. Weather still chilly. (T.S.R. 26. 2 P.M. 41. S.S. 39.)

Jan. 12. Sabbath. A cloudy and rainy day, and very windy and rainy night. It beats all how much rain we do have. I went to meeting. Rev. Thomas preached from the text, "Remember the poor", &.c. and after the service he detained the church members and scolded them because they do not hire a janitor, and because they do not attend the prayermeeting better. Well, Geo. Locke is the only one financially able to hire a janitor for the church, and it is not at all likely he will do it when he expects his wife to do all her own work without help. And as to the prayermeetings, Susie does not feel able to come over in such stormy evenings after doing all her housework, and I am not able to go, so there the matter stands. I fear it will not do Mr. Thomas any good, but rather harm, to scold. Received letters from the trio of boys - Horace, Calvin and Willie. Calvin tells of an amusing experience of his in attending church in Nashua. He fell down twice in one day flat upon the church steps slippery with ice, when walking with the girls, and rolled upon the ground and others did the same. (T.S.R. 35. 2 P.M. 40. S.S. 40.)