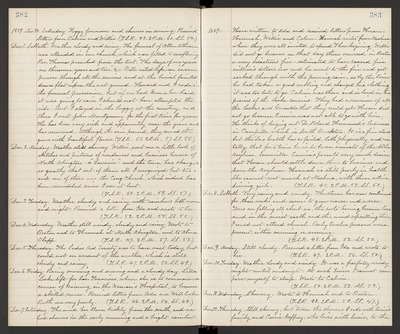 Dec. 1. Sabbath. Weather cloudy and rainy. The funeral of Allen Athearn was attended in our church, which was filled to overflowing. Rev. Thomas preached from the text, "The days of our years are threescore years and ten," &.c. Belle acted like and insane person through all the services and at the burial fainted down flat upon the wet ground. Howard and I rode in the funeral procession, but if we had known how hard it was going to rain, I should not have attempted the ride. But I stayed in the buggy at the cemetery, and there I met John Montgomery for the first time for years. He has been very sick and apparently near the grave and has recovered. Although the rain poured, they covered the grave with beautiful flowers. (T.S.R. 51. 2 P.M. 57. S.S. 55.)

Dec. 2. Monday. Weather still showery. Willie sent me a little book of sketches and pictures of residences and business houses of North Abington - a "Souvenir" - and the town has changed so greatly that out of them all I recogized but two and one of these was the Cong. church, which indeed has been remodeled since I saw it last. (T.S.R. 50. 2 P.M. 59. S.S. 57.)

Dec. 6. Friday. Rainy morning and evening and a cloudy day. Lilla Locke left for San Francisco, where she is to commence a course of training in the Woman's Hospital, to become a skilled nurse. Received letters from Ada and Will Cooke. Both are very poorly. (T.S.R. 46. 2 P.M. 54. S.S. 49.)

Dec. 7. Saturday. The wind has blown briskly from the south, and we had showers in the early morning and a bright rainbow.

1889. Have written to Ada and received letters from Horace, Hannah, Willie and Calvin. Hannah writes from Nashua when they were all invited to spend Thanksgiving. Willie did not go because on that day there occurred in Boston a very disastrous fire - estimated to have caused five million's dollars loss - and he went to the fire and got soaked through with the pouring rain, so by the time he had taken a good rubbing and changed his clothing it was too late to go. Calvin was there and is loud in his praises of the Locke cousins. They had a reunion of all the Lockes and Geroulds that they could get. Horace did not go because Eunice was not able to go with him. He thinks of buying out Dr. Roland Hammond's business in Campello, which is South Brockton. It is a fine stand but the Dr's health has so failed, both physically and mentally, that for a time he is to be an inmate of the McLean Asylum, Somerville. Eunice's parents very much desire that Horace should settle down there to business and leave the Asylum. Hannah is still poorly in health. She cannot rest much at Nashua, with those active, driving girls. (T.S.R. 48. 2 P.M. 58. S.S. 50.)

Dec. 8. Sabbath. Very rainy and windy. The storm has now continued for three weeks and seems to grow worse and worse. Trees are falling all about us, the roots having become loosened in the moist earth, and the wind upsetting them. I could not attend church. Only twelve persons were present, either morning or evening. (T.S.R. 48. 2 P.M. 52. S.S. 50.)

Dec. 12. Thursday. Still showery, but 'tween the showers I rode with Susie's family and Carrie Geffroy, who lives with Susie, to the