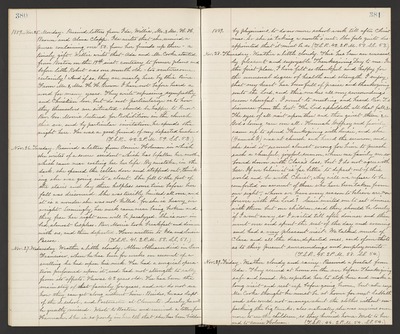 1889. Nov. 25. Monday. Received letters from Ida, Willie, Mr. & Mrs. H.H. Brown and Alma Clapp. Ida writes that she received a purse containing over $50. from her friends up there - a timely gift. Willie writes that Ada and Mr. Cooke started from Boston on the 19th inst. contrary to former plans and before little Robert was one month old - too venturesome, certainly! And if so, they are nearly here by this time. From Mr. & Mrs. H. H. Brown I have not before heard a word for many years. They write expressing sympathy and Christian love, but do not particularize as to how they themselves are situated - should be happy to know. Rev. Geo. Morris lectured for Prohibition in the church this eve, and by particular invitation, he spends the night here. He was a good friend of my departed husband. (T.S.R. 42. 2 P.M. 59. S.S. 53.)

Nov. 26. Tuesday. Received a letter from Annie Holman in which she writes of a severe accident which has befallen her mother which came near costing her her life. By mistake, in the dark, she opened the cellar door and stepped out thinking she was going into a closet. She fell to the foot of the stairs and lay there helpless sometime before her fall was discovered. She was terribly bruised all over, and it is a wonder she was not killed, for she is heavy in weight. Seemingly, her neck came near being broken and they fear her right arm will be paralyzed. She is now in bed, almost helpless. Rev. Morris took breakfast and dinner with us, and then departed. Have written to Ida and Susie Pascoe. (T.S.R. 41. 2 P.M. 58. S.S. 51.)

Nov. 27. Wednesday. Weather a little cloudy. Allen Athearn died in San Francisco, where he has been for weeks on account of a swelling he had upon his neck. He had a surgical operation performed upon it, and had not strength to rally from its effects. He was 43 years old. He has been the main stay of that family for years, and we do not see how they can get along without him. Besides, he was Supt. of the S. school, and Postmaster at Clements. Surely, he will be greatly missed. Wrote to Boston and received a letter from Hannah. She is so poorly in health that she has been bidden

Nov. 28. Thursday. Weather a little cloudy. This has been an unusually pleasant and enjoyable Thanksgiving Day to me. In the first place, I have felt so thankful and happy for the unusual degree of health and strength I enjoy, that my heart has been felt of praise and thanksgiving unto the Lord, and this makes all my surroundings seem cheerful. I went to meeting and heard Rev. T.'s discourse from the text, "The Lord upholdeth all that fall, &.c. The eyes of all wait upon thee! And thou givest them" &.c. God's loving care over all. Hannah Geffroy and family came up to spend Thanksgiving with Susie, and she (Hannah G.) was at church and heard the sermon, and she said it seemed almost wrong for him to preach such a cheerful, joyful sermon, when our family are so bowed down with Clara's loss, but I do not agree with her. If we believe it is "far better" to depart out of this world and be with Christ, why we "refuse to be comforted" on account of those who have been taken from our sight, whom we have every reason to believe are now "forever with the Lord"? Susie invited me to eat dinner with them but our children said they should be lonely if I went away, so I waited till after dinner and then went over and spent the rest of the day and evening and had a very pleasant visit. We talked much of Clara and all the dear, departed ones, and of our th'ots as to their present surroundings and employments. (T.S.R. 45. 2 P.M. 58. S.S. 54.)

Nov. 29. Friday. Weather cloudy and rainy. Received a postal from Ada. They arrived at home on the eve before Thanksgiving safe and sound. We expected her to stop here and make a long visit and rest up before going home, but she says Mr. Cooke thought he must be at home for next Sabbath and she could not manage about the clothes without unpacking the big trunks, also naturally she was anxious once more to see the children, so they hurried home. Wrote to her and to Annie Holman. (T.S.R. 46. 2 P.M. 54. S.S. 54.)