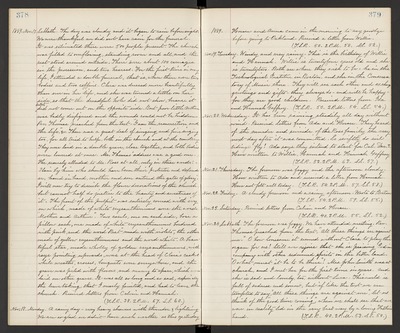 1889. Nov. 17. Sabbath. The day was cloudy and it began to rain before night. We were thankful we did not have rain for the funeral. It was estimated there were 500 people present. The church was filled to overflowing, standing room and all, and the rest stood around outside. There were about 100 carriages in the procession, and two hearses. For the first time in my life, I attended a double funeral, that is, where there were two bodies and two coffins. Clara was dressed more beautifully than ever in her life, and she was turned a little on her side, so that the dreadful hole did not show, because it bullet did not come out on the opposite side. But poor little Arthur was badly disfigured and the wounds could not be hidden. Rev. Thomas preached from the text - "I am the resurrection and the life", &.c. There was a great deal of singing and fine singing too, for all tried to help, both in the church and at the cemetery. They were laid in a double grave, close together, and both bodies were lowered at once. Mr. Thomas' address was a good one. He scarcely alluded to Mr. Ross at all, only in these words: - Slain by him who should have been their protector and defender, hand in hand, mother and son entered the gates of glory". I will now try to describe the flower decorations of the church, but cannot half do justice to the beauty and sweetness of it. The front of the pulpit was entirely covered with ivy on which, made of white chrysanthemums were the words "Mother and Arthur". Two easels, one on each side, bore a pillow each, one made of white chrysanthemums bordered with pink, and the word "Rest" made with violets, the other made of yellow chrysanthemums and the word white. A beautiful star, made wholly of golden chrysanthemums, with rays pointing upwards, was at the head of Clara's casket while wreaths, crosses, bouquets were everywhere, and the grave was piled with flowers, and many to spare, which were laid on other graves. It was all so long and so sad, especially the leave taking, that I nearly fainted, and had to leave the church. Received letters from Calvin and Hannah. (T.S.R. 38. 2 P.M. 67. S.S. 60.)

Nov. 18. Monday. A rainy day - very heavy showers with thunder & lightning. We are so glad we didn't have such weather as this yesterday.

Nov. 19. Tuesday. Windy and very rainy. This is the birthday of Willie and Hannah. Willie is twenty four years old and she is twentytwo. Both are where they wish to be - he in the Technological Institute in Boston, and she in the Conservatory of Music there. They will see each other and exchange greetings and gifts - they always do - and will be happy - for they are good children. Received letters from Ida and Hannah Geffroy. (T.S.R. 50. 2 P.M. 54. S.S. 54.)

Nov. 20. Wednesday. It has been raining steadily all day without wind. Received letters from Ada and Horace. They heard of the murder and suicide of the Ross family the very next day after it was committed. So swiftly do evil tidings fly! Ada says they intend to start for Cal. Dec. 3. Have written to Willie, Hannah and Hannah Geffroy. (T.S.R. 52. 2 P.M. 63. S.S. 57.)

Nov. 24. Sabbath. The forenoon was foggy. We have attended meeting. Rev. Thomas preached from the text, "All these things are against me". O how lonesome it seemed without Clara to play the organ for us! Still we rejoice that she is praising God in company with other redeemed spirits in the better land. "O what must it be to be there"! Mrs. John Smith was at church, and I met her for the first time in years. And she is sad and lonely, too, without Lura. This world is full of sadness and sorrow, but if like the text we are tempted to say. "All these things are against me", let us think of the "good time coming" when we shall see that we were in reality led in the very best way by a loving Father's hand. (T.S.R. 40. 2 P.M. 53. S.S. 50.)