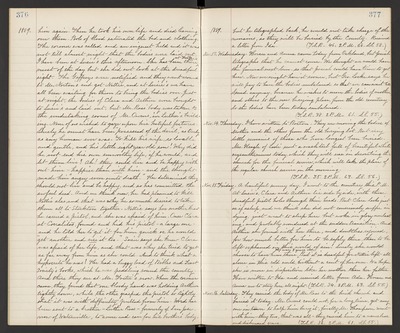 1889. him again. Then he took his own life and died leaning over them. Pools of blood saturated the bed and clothing. The coroner was called and an inquest held and it was not till almost night that the bodies were laid out. I have been at Susie's this afternoon. She has been there at Foster's most of the day but she did not look at the dreadful sight. The Geffroys were notified and they went around to Mr. Norton's and got Nettie, and at Susie's we have all been waiting for them to bring the bodies over. Just at night, the bodies of Clara and Arthur were brought to Susie's and laid out, but Mr. Ross' body was taken to the undertaking rooms of Mr. Owens, in Luther's building. None of us wished to gaze upon his hateful features. Surely, he must have been "possessed of the devil", as truly as any human ever was. To kill his wife, so lovable and gentle, and his little eight year old son! Why did he not end his own unworthy life, if he would, and let them live? Ah! they could have and be happy with out him - happier than with him - and the thought made him "angry even unto death". He determined they should not live and be happy, and so has committed the awful deed. And we think now, he had planned to kill Nettie also, and that was why he so much desired to take them all to Stockton together. Nettie says her mother knew he carried a pistol, and she was afraid of him. Once Clara at Corralitos, found and hid his pistol - a large one and he told her to get it for him quick or he would "get another and use it too". Susie says she knew Clara was afraid of her life, and that was why she tried to get as far away from him as she could. And to think what a hypocrite he was! He had a buggy load of Bibles and Tract Society's books, which he was peddling round the country. And there they are at Mr. Foster's now. When the coroner came, they found that one bloody hand was holding Arthur tightly down, while the other grasped the pistol so tightly that it was with difficulty pulled from him. Word has been sent to a brother - Luther Ross - formerly of San Jose, now of Watsonville, to come and care for his brother's body,

Nov. 13. Wednesday. Horace and Anna came today from Oakland, but Josiah telegraphs that he cannot come. We thought we would have the funeral next Sun. so that Josiah could have time to get here. Now we might have it sooner, but Geo. Locke says he will pay to have the bodies embalmed so that we can wait till Sund. anyway, because he wishes to move the bodies of mother and others to the new burying place, from the old cemetery. So the bodies have been today embalmed. (T.S.R. 38. 2 P.M. 61. S.S. 55.)

Nov. 14. Thursday. I have written to Boston. They are moving the bodies of Mother and the others from the old burying lot. But very little remains of those who have longest been buried. Mrs. Heagle of Lodi sent a wash tub full of beautiful white chrysanthemums today, which they will use in decorating the church for the funeral service, which will take the place of the regular church service in the morning. (T.S.R. 35. 2 P.M. 63. S.S. 56.)

Nov. 15. Friday. A beautiful sunny day. I went to the cemetery this P.M. at Susie's, Clara and Arthur lie side by side, with those dreadful pistol holes though their heads. But Clara looks just as if asleep, and we think she did not consciously suffer in dying, just went to sleep here but woke in glory everlasting, and probably wondered at the sudden transition. And Arthur she found with her there, and doubtless rejoiced, for how much better for him to be safely there, than to be left orphaned in this world of sin! Surely she would choose to have him there. He was 8 years old. But it is dreadful for Nettie left all alone in this cold world, without a cent of her own. We hope she is more in disposition like her mother than her father. Have written to Ida and received letter from Ada. Horace and Anna are to stay here all night. (T.S.R. 34. 2 P.M. 63. S.S. 55.)