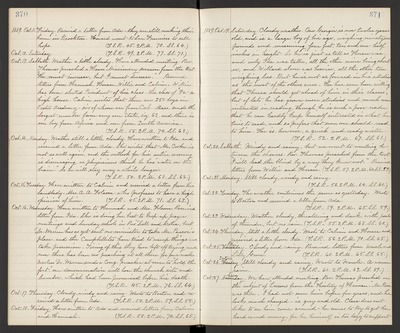 Oct. 13. Sabbath. Weather a little cloudy. have attended meeting. Rev. Thomas preached a Home Missionary sermon from the text, "He must increase, but I must decrease". Received letters from Hannah, Horace, Willie and Calvin. Willie has been elected President of his class - the class of '92 - a high honor. Calvin writes that there are 350 boys in Exeter Academy - six of whom are from Cal. Mass. sends the largest number from any one State, viz: 63, and there is one boy from Africa and one from South America. (T.S.R. 55. 2 P.M. 74. S.S. 63.)

Oct. 14. Monday. Weather still a little cloudy. Have written to Ida and received a letter from Ada. She writes that Mr. Cooke is not so well again, and the outlook for his entire recovery is discouraging, as physicians think he has "water on the brain". So he will stay away a while longer. (T.S.R. 50. 2 P.M. 68. S.S. 62.)

Oct. 16. Wednesday. Have written to Hannah and Mrs. Folsom. Received letter from Ida. She is doing her best to keep up prayer meetings and Sunday schools in Rio Dell and Scotia, but Dr. Warren has as yet sent no minister to take Mr. Pascoe's place, and the Campbellites have tried to usurp things and take possession. Tiring of this they have left off trying and now there has been no preaching at all there for four weeks. Unless Dr. Warren sends a Cong. preacher at once to "hold the fort", our denomination will lose the church site and lumber, which had been promised before his death. (T.S.R. 45. 2 P.M. 76. S.S. 64.)

1889. Oct. 19. Saturday. Cloudy weather. Our Georgie is now twelve years old, and is a large boy of his age, weighing ninetyone pounds and measuring four feet, ten and one-half inches in height. So he is just as tall as Horace was, and only Ida was taller, all the other nine being shorter, and Willard alone was heavier, all the other ten weighing less. But he is not as forward in his studies as the most of the others were. He has even been willing that Theresa should get ahead of him in their classes, but of late he has grown more studious and much more interested in reading, though he is such a poor reader that he can hardly keep himself interested in what he tries to read, and so prefers that some one should read to him. He is, however, a quick and ready writer. (T.S.R. 52. 2 P.M. 67. S.S. 61.)

Oct. 27. Sun. We have attended meeting. Rev. Thomas preached on the subject of "Lessons from the History of Haman". Mr. Ross was there. I had not seen him before for years, and he looks much changed - is grey and old. Clara does not like to see him come around - he comes to try to get her hard earned money, for he himself is too lazy to support