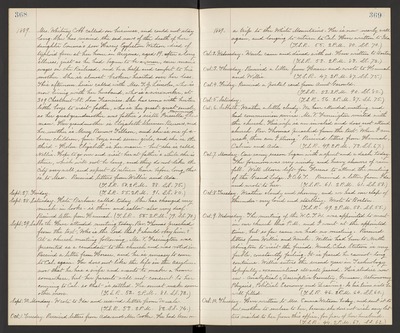 1889. Mrs. Whitney Cobb called on business, and could not stay long. She has received the sad news of the death of her daughter Emma's son Harry Eggleston Watson - died of typhoid fever at her home in Arizona, aged 19, after a long illness, just as he had begun to be a man, earn man's wages on the Railroad, and be a help and comfort to his mother. She is almost broken-hearted over her loss. This afternoon, Susie called with Mrs. T.J. Lincoln, who is now living with her husband, who is a wire worker, at 309 Chestnut St. San Francisco. She has come with her two little boys to visit father, who is her great-great uncle, as her greatgrandmother was father's sister Priscilla Hammond Sherman. Her grandmother is Elizabeth Sherman Barrows, and her mother is Mercy Barrows Tillson, and she is one of eleven children, four boys and seven girls, and she is the third - Helen Elizabeth is her name - but she is called Nellie. Hope to go over and visit her at father's while she is there, which will not be long, and they do not like the City very well, and expect to return home before long, that is, to Mass. Received letters from Willie and Ada. (T.S.R. 50. 2 P.M. 88. S.S. 75.)

Sept. 29. Sabbath. have attended meeting today. Rev. Thomas preached from the text, "Who is the Lord that I should obey him?" At a church meeting following, Mr. V. Farrington was presented as a candidate to the church and was voted in. Received a letter from Horace, and he is uneasy to come to Cal. again. He does not like the life in the Asylum now that he has a wife and wants to make a home somewhere, but her presents will not consent to her coming to Cal. so that is settled. He must make some other move. (T.S.R. 52. 2 P.M. 81. S.S. 72.)

Oct. 1. Tuesday. Received letters from Ada and Mr. Cooke. He had been on

Oct. 6. Sabbath. Weather a little cloudy. We have attended meeting, and had communion service. Mr. V. Farrington united with the church. His wife is an invalid and does not attend church. Rev. Thomas preached from the text, "When I am weak, then am I strong". Received letters from Hannah, Calvin and Ada. (T.S.R. 49. 2 P.M. 73. S.S. 67.)

Oct. 7. Monday. Our rainy season began with a spurt and a dash today. The forenoon was very windy and heavy showers of rain fell. Will Moore left for Fresno to attend the meeting of the Grand Lodge. P.O.G.T. Received a letter from Ida and wrote to her. (T.S.R. 61. 2 P.M. 61. S.S. 58.)

Oct. 9. Wednesday. The meeting of the W.C.T.U. was appointed to meet in our church this P.M. and I went at the appointed time, but so few came we had no meeting. Received letters from Willie and Uncle. Willie had been to North Abington to visit the friends. Uncle Chas. Stetson is very feeble, constantly failing. It is feared he cannot long continue. Willie enters the second year in Technology hopefully - examinations all well passed. His studies now are - Analytical & Descriptive Geometry, German, Astronomy Physics, Political Economy and Drawing. So his time will be well filled. (T.S.R. 46. 2 P.M. 64. S.S. 60.)