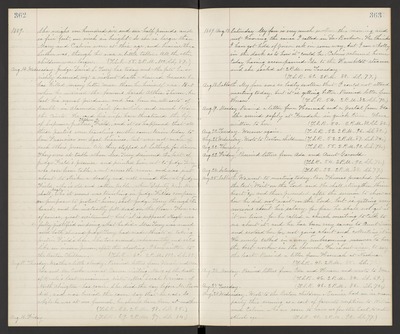 Aug. 14. Wednesday. Judge David S. Terry has today met the fate he so richly deserved, viz: a violent death - deserved because he has killed many better men than he himself was. But when he married the famous Sarah Althea Sharon, he lost his usual prudence and has been in all sorts of trouble in Alameda jail for awhile and much before the Courts. He and his wife have threatened the life of Supreme Justice Stephen I. Field, and it so happened that all these parties were traveling on the same train today to San Francisco on legal business, but were not aware of each other's presence till they stopped at Lathrop for dinner. They were at table when Mrs. Terry discovered the fact of Judge Field's presence and pointed him out to Judge Terry who rose from table, went across the room and was just about to strike a deadly and well aimed blow at Judge Field who is old and rather feeble, when Deputy U.S. Marshall Nagle, who it seems was traveling in Judge Field's company on purpose to protect him, shot Judge Terry through the heart, and he instantly fell dead on the floor. There was of course, great excitement, but it is supposed Neagle was fully justified in doing what he did. Mrs. Terry was armed and both she and Judge Terry had made threats of taking Justice Field's life. She tore around vehemently and acted like an insane person, after the shooting. I have written to the Boston children. (T.S.R. 60. 2 P.M. 102. S.S. 85.)

Aug. 15. Thursday. Weather a little cloudy. Received letters from Uncle and Ada. Ada and Mr. Cooke were at Caver visiting. News of the death of Uncle's last remaining sister - Mrs. Sarah Winson - of North Abington - has come. She died the day before Mr. Pascoe did, and was buried the same day that he was. So while he was at one funeral, he should have been at another. (T.S.R. 62. 2 P.M. 98. S.S. 85.)

1889. Aug. 17. Saturday. My face is very much swollen this morning and not knowing the cause I called in Dr. Barbour. He thinks I have got hold of poison oak in some way, but I am wholly in the dark as to how it could be. Calvin returned home today having accompanied Ida to the Humboldt steamer and she sailed at 2 P.M. on Tuesday. (T.S.R. 60. 2 P.M. 88. S.S. 77.)

Aug. 25. Sabbath. We went to meeting today. Rev. thomas preached from the text, "Wait on the Lord and He shall strengthen thine heart", &.c. and then proceeded after the sumon to show us how he did not wait on the Lord, but is getting very anxious about his salary, for fear he shall not get at it in time, for he called a church meeting to talk to us about it, and he has been very saney to Aunt Susie and scolded her for not going about and collecting it in. He surely talked in a very unbecoming manner to her the best worker in the church. He is not wise, to say the least. Received a letter from Hannah at Nashua. (T.S.R. 48. 2 P.M. 85. S.S. 71.)

Aug. 28. Wednesday. Wrote to the Boston children. Eunice had an ice cream party this evening as a sort of farewell reception to Willie and Calvin who are soon to leave us for the East, to enter school again. (T.S.R. 48. 2 P.M. 90. S.S. 77.)