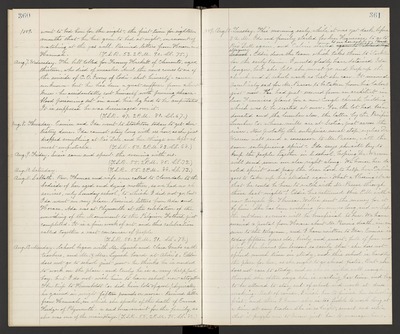 Aug. 7. Wednesday. The bell tolled for Fanny Hackett of Clements, aged thirteen, who died of measles. And the news comes to us of the suicide of C.O Ivory of Lodi - shot himself - cause unknown but he has been a great sufferer from a hurt knee - he accidentally cut himself with pruning shears - blood poisoning set in and his leg to be amputated. It is supposed he was discouraged over it. (T.S.R. 47. 2 P.M. 81. S.S. 67.)

Aug. 8. Thursday. Eunice and Ida went to Stockton today to get dentistry done. Ida cannot stay long with us now, as she just dropped everything at Rio Dell, and her things are left at most unprotected. (T.S.R. 50. 2 P.M. 83. S.S. 68.)

Aug. 11. Sabbath. Rev. Thomas and wife were called to Cloverdale to the bedside of her aged and dying mother, so we had no ch. services, only Sunday school, to which I did not go, but Ida went in my place. received letters from Ada and Horace. Ada was at Plymouth at the celebration of the unveiling of the Monument to the Pilgrim Fathers, just completed. It is a fine work of art, and this celebration called together a vast concourse of people. (T.S.R. 50. 2 P.M. 91. S.S. 78.)

Aug. 12. Monday. School began with Mr. Lynch and Clara Guebs as the teachers, and Mr. & Mrs. Lynch board at Alice's. Eddie does not go to school just now - he thinks he is needed to work on the place - and truly he is a very helpful boy, but I do not wish him to leave school now altogether. The trip to Humboldt Co. did him lots of good physically, he gained in weight fifteen pounds or more. Received letter from Hannah in which she speaks of the death of Emma Hedge of Plymouth - a sad bereavement for the family, as she was one of the mainstays. (T.S.R. 55. 2 P.M. 95. S.S. 82.)

1889. Aug. 13. Tuesday. This morning early, while it was yet dark, before 3 A.M. Ida and family started for San Francisco, to go to Rio Dell again, and Calvin started to see her safely on board steamer. Eddie drove the team which takes them to Stockton for the early train. I would gladly have detained Ida longer, but she felt she must go and keep up the church and S. school work as best she can. It seemed peculiarly sad for Mr. Pascoe to be taken from his labors just now. He had just secured from an architect in San Francisco plans for a new Congl. church building which was to be erected at once. For the lot had been donated and the lumber also, the latter by the Pacific Lumber Co. whose mills are at Scotia, just across the river. Now probably the enterprise must stop, unless Dr, Warren will send a successor to Mr. Pascoe, with the same enterprising spirit. Ida says she will try to keep the people together in S. school, hoping Dr. Warren will send some one else right along. We honor her devoted spirit and pray the dear Lord to help her. Calvin goes to take up his studies again. What a blessing it was that he could be here to watch with Mr. Pascoe through those last nights! Eddie has returned this P.M. with a new tricycle for Theresa. Willie sent the money for it by him. She has been wishing for one so long, and we hope the outdoor exercise will be beneficial to her. We have received a postal from Horace about Mr. Pascoe's death, in answer to the telegram, and I have written to Ida. Eunice is today fifteen years old, lively and smart, full of fun and play. She learns her lessons so easily that she does not spend much time in study, and this school is hardly the place for her, as she ought to go ahead faster. But she does not care to study, and so she is suited well enough though she often says she is wasting her time, and begs to be allowed to stay out of school and work at dressmaking. But of course, I wish her to finish her schooling first, and then I know she is too fickle to work long at a time at any trade. She is so bright, smart and active that it puzzles me to know just how to manage her.