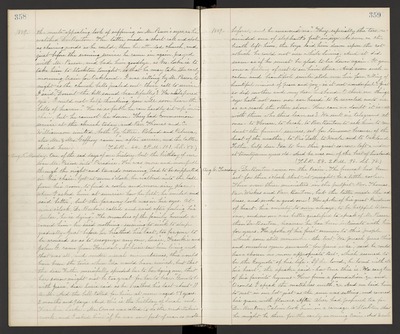 1889. the mute appealing look of suffering in Mr. Pascoe's eyes, as he watched Dr. Benton. The latter made a short call and spoke as cheering words as he could, then he attended church, and just before the evening service he came in again, prayed with Mr. Pascoe, and bade him goodbye, as Geo. Locke is to take him to Stockton tonight, so that he may take the early morning train for Oakland. I was sitting by Mr. Pascoe tonight as the church bells pealed out their call to service. I said, "Doesn't the bell sound beautifully?" He whispered "yes". I could not help thinking "you will soon hear the bells of heaven". He is so feeble he can hardly sit up in his chair, but he cannot lie down. They had communion service at the church today, and Rev. Thomas and C. Williamson united, both by letter. Roland and Rebecca, also Mr. & Mrs. Geffroy came in after service, and the latter dined here. (T.S.R. 64. 2 P.M. 101. S.S. 83.)

Aug. 5. Monday. One of the sad days of our history, but the birthday of our dear Mr. Pascoe into Paradise. He was more and more feeble through the night and towards morning had to be supported in his chair. Yet at seven o'clock, he walked into the hall from his room, to find a cooler and more airy place. When I asked him at sunrise how he felt, he smiled and said "better", but the far away look was in his eyes. At nine o'clock, Dr. Barbour called and said after feeling his pulse, "he is dying". The members of the family hovered around him - he said nothing - seeming to sink to sleep gradually. Just before he breathed his last, too far gone to be aroused so as to recognize anyone, Susie, Frankie and John G. came from Ferndale. So Susie saw him living and that was all, and under usual circumstances, this would have been the time when Ida would have arrived, but that the dear Father mercifully speeded her to her dying one, that her sorrow might not be too great for her to bear. "Gone to be with Jesus", dear Susie said as he breathed his last about 11 A.M. And the bell tolled for him at noon - aged 51 years, 2 months and 9 days. And this is the birthday of Sarah and Frankie Locke. Mr. Owens us was called to do the undertakers work, and I asked him if he ever saw feet of man so swollen

1889. before, and he answered "no". They, especially the toes, reminded one of elephant's feet in size. As soon as the breath left him, the boys laid him down upon the cot which he could not use while living and it did seem as if he must be glad to lie down again. It gave one a feeling of rest to see him there. And soon such a calm and beautiful smile stole over his face, telling of beautiful visions of peace and joy - is it not wonderful? Just so did mother and my dear husband. O there we things "eye hath not seem nor ear heard" to be revealed unto us as we reach the other show. How can we doubt it is well with them who thus leave us? We sent six telegrams at once - to Horace, to Sarah, to Rev. Benton to ask him to conduct the funeral services, set for tomorrow because of the heat of the weather, to Rio Dell, to Uncle and to Oakland. Father, help dear Ida to bear this great sorrow left a widow at twentyseven years old. And he was one of the best of husbands. (T.S.R. 58. 2 P.M. 98. S.S. 78.)

Aug. 6. Tuesday. Dr. Benton came on the train. The funeral had been set for three o'clock that it might be a little cooler. There were three ministers in the pulpit. Rev. Thomas, Rev. Wickes and Rev. Benton, but the latter made the address, and such a good one! He spoke of his great kindness of heart, his anxiety to serve always, to be helpful to someone, and no one was better qualified to speak of Mr. Pascoe than Dr. Benton, because he has been intimate with him for years. He spoke of his first sermon to this people which some still remember - the text, "We preach Jesus Christ and ourselves your servants for Jesus sake", said he could have chosen no more appropriate text, which seemed to be the keynote of his life. "If he loved, he loved with all his heart", the speaker said - how true this is. We sang two of his favorite hymns - "How firm a foundation", &.c. and "O could I speak the matchless worth", &.c. And we laid him to rest in our lot just as the sun was setting, and covered his grave with flowers. After Alice had prepared tea for Dr. Benton, Calvin took him in a carriage to Stockton that he might be there for the early morning train. And Uncle