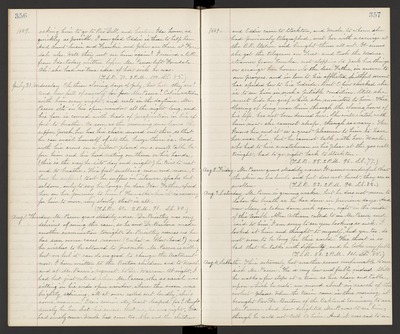 1889. asking him to go to Rio Dell and hasten Ida home, as quickly as possible. I am glad Eddie is there to help her. And Aunt Susie and Frankie and John are there at Ferndale also. Will they not see him again? I received a letter from Ida today written before Mr. Pascoe left Ferndale. Ah! she had no true idea of how sick he was. (T.S.R. 70. 2 P.M. 100. S.S. 85.)

July 31. Wednesday. Oh these closing days of July, how hot they are! And how full of anxiety for poor Mr. Pascoe! Calvin watches with him every night, and rests in the day time. Mr. Pascoe sits in his open window all the night long, and his face is covered with beads of perspiration in his effort to breathe. As soon as the morning sun leaves the upper porch, he has his chair moved out there so that he can avail himself of all the breeze there is. And with his arms on a pillow placed on a small table before him and his head resting on them or his hands, (this is the way he sits day and night) he tries to rest and to breathe. His feet swelling more and more, O how he suffers! But he suffers in silence, speaks but seldom, only to say he longs for dear Ida. Father, speed her on her journey to him! He walks when it is necessary for him to move, very slowly, that is all. (T.S.R. 60. 2 P.M. 98. S.S. 80.)

Aug. 1. Thursday. Mr. Pascoe grows steadily worse. Dr. Priestley was very desirous of seeing the case, so he and Dr. Barbour made another examination tonight. Dr. Priestley assures us he has seen worse cases recover (O what a blow-hard!) and he wishes to be allowed to prescribe. Mr. Pascoe is willing but we feel it can do no good to change the treatment now. I have written to the Boston children and to Uncle and at Mr. Pascoe's request, to Dr. Warren. At night, I had but just retired, when Mr. Pascoe, who as usual was sitting in his wide open window, where the moon was brightly shining, all at once called out loudly, "she's come, mamma, Ida's come". My heart leaped. for I thought surely he has lost his senses. But no, he was right, Ida had surely come. Uncle had come too. She and the children

1889. and Eddie came to Stockton, and Uncle, to whom she had previously telegraphed, met her with a carriage at the R.R. Station and brought them all out. It seems she got the telegram on Tues. and took the Wednes. steamer from Eureka, not stopping to pack her things or arrange her house. So the dear Father, in answer to our prayers, and in love to his afflicted, faithful servant has speeded her to his bedside. But O how shocked she is to see him in such a pitiable condition. Still she must hide her grief while she ministers to him. This blessing of being near him through the closing hours of his life, has not been denied her. She will watch with him now - she cannot sleep, though so weary. He knows her, and it is a great pleasure to him to have her near him, but he cannot talk with her. Uncle, who had to hire a watchman in his place at the gas well tonight, had to go right back to Stockton. (T.S.R. 55. 2 P.M. 96. S.S. 77.)

Aug. 3. Saturday. Mr. Pascoe is growing weaker, but he does not seem to labor for breath as he has done in previous days. And now Mary is taken down sick again, right in the midst of this trouble. Allen Athearn called to see Mr. Pascoe and said to him, "I am sorry to see you looking so sick. I looked at him and thought to myself, "and you, too, do not seem to be long for this world". His throat is so bad that he talks with difficulty, and he looks very feeble. (T.S.R. 58. 2 P.M. 101. S.S. 85.)

Aug. 4. Sabbath. This extremely hot weather seems unfavorable to our sick Mr. Pascoe. He is very low and feeble indeed. Still he walks a few steps at a time as his chair and table, upon which he rests, are moved about in search of the coolest places. When the train came in this morning, it brought Rev. Dr. Benton of the Oakland Seminary to see Mr. Pascoe. And how delighted Mr. P. was to see him, thought he could not talk to him. And it was sad to see