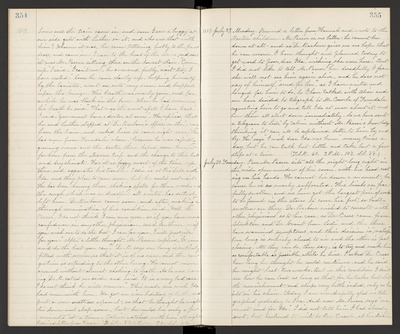 1889. home and the train came in, and soon I saw a buggy at our side gate with Luther in it, and who was that with him? Whoever it was, he came tottering feebly to the front door, and came in. I ran to the head of the stairs, and saw it was Mr. Pascoe sitting there on the lowest stair. "Come up", I said. "I can't now", he answered feebly", wait till I have rested". Soon he came slowly up, helping himself by the banister, went on into my room and dropped upon the lounge. His breath was nearly gone, and for awhile he was black in the face. When he had recovered his breath he said. "That was the worst spell I have had". I said, "You must have a doctor at once". He replied that he and Luther stopped at Dr. Barbour's office on their way from the train, and asked him to come right over. He has come from Ferndale alone, because he was rapidly growing worse and the doctor there hoped some benefit for him from the steamer trip and the change to this hot and dry climate. For it is foggy most of the time up there, and aggravates his trouble. Eddie is at Rio Dell with Ida and they plan to come soon, but he could not wait. He has been having these chocking spells for three weeks and the cough, which was so dreadful all winter, has entirely left him. Dr Barbour came soon, and after making a thorough examination of his condition, said, "Well, Mr. Pascoe, I do not think I can cure you, so if you have more confidence in any other physician, send for them, or if you wish me to do the best I can for you, I will prescribe for you". After a little thought, Mr. Pascoe replied, "Go on and do the best you can". Dr. B. says one lung is entirely filled with serum, so that it is of no use, and the congestion is extending to the other lung. He cannot move around without almost chocking to death. As he was leaving. Dr. B. called me aside and said "It is a very bad case, I do not think he will recover". This made me wish Ida had some with him. We got an iron bedstead of Luther and put a new mattress upon it, so that he thought he might lie down and sleep some, but he could lie only a few minutes at a time. calvin watched with him all night. Received letter from Horace. (T.S.R. 58. 2 P.M. 98. S.S. 82.)

1889. July 29. Monday. Received a letter from Hannah and wrote to the Boston children. Mr. pascoe is no better - he cannot lie down at all and as Dr. Barbour gives us no hope that he can recover. I have though and planned today to get word to poor, dear Ida, wishing she were here. But I did not like to tell Mr. Pascoe how dreadfully I fear she will not see him again alive, and he does not say of himself, "send for her", as I have waited and longed for him to do. So I have talked with Alice and we have decided to telegraph to Mr. Coombe of Ferndale requesting him to go and tell Ida at once about it, and have them all start down immediately. So we have sent a telegram to Lodi by Calvin without Mr. Pascoe's knowledge thinking it can all be explained better to him by and by. He says "I wish dear was here" many times a day, but he can talk but little and take but a few steps at a time. (T.S.R. 60. 2 P.M. 103. S.S. 88.)

July 30. Tuesday. Poor Mr. Pascoe sits all the night long right in the wide open window of his room, with his head resting on his hands. He cannot lie down a moment, because he is nearly suffocated. His limbs are fearfully swollen, and we have got the largest pair of socks to be found in the stores to come his feet, so badly swollen are they. Dr. Barbour wished to consult with other physicians as to his case, so Dr. Cross came from Stockton and Dr. Grant from Lodi, and the three have examined symptoms, and their decision is, "no hope". One lung is entirely closed to air and the other is fast closing. all they can do, they say, is to try and make him as comfortable as possible, while he lives. I asked Dr. Cross how long he thought he could continue, and he said he might last two weeks. But in this condition I don't see how can last as long as that, for he takes but little nourishment, and sleeps very little indeed, only as he sits in his chair. Today I am wonderfully glad we telegrahed yesterday to Ida. And now Mr. Pascoe says "we must send for Ida". I did not tell him I had already sent, but hastened to write to Rev. Coombe, at his dictation