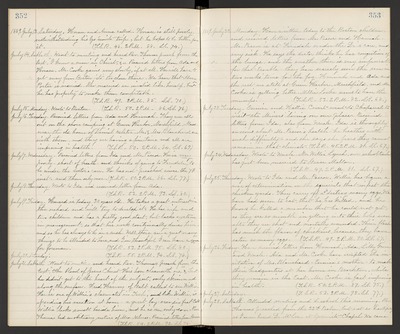 July 14. Sabbath. Went to meeting and heard Rev. Thomas preach from the text, "I knew a man in Christ", &c. Received letters from Ada and Horace. Mr. Cooke gains very slowly, if at all. He will have to get away from Boston - it-s too close there. We hear that Mary Porter is married. She married an invalid like herself, but he has property to make them comfortable. (T.S.R. 49. 2 P.M. 85. S.S. 70.)

July 16. Tuesday. Received letters from Ada and Hannah. They are all out on the shore camping at Green Harbor, Marshfield, Mass. near the old home of Daniel Webster. Mr. & Mrs. Blanchard are with them, and they are having a fine time and all are improving in health. (T.S.R. 50. 2 P.M. 84. S.S. 69.)

July 19. Friday. Howard is today 30 years old. He takes a great interest in the orchard and will try to develop it. He has wife and two children and has a pretty good start, but lacks system in management, so that his work continually drives him, and so he has always to be in a rush. Well, there are a great many things to be attended to here, and I'm thankful I can have a son for foreman. (T.S.R. 53. 2 P.M. 95. S.S. 80.)

July 21. Sabbath. Went to meeting and heard Rev. Thomas preach from the text, "The blood of Jesus Christ His Son cleanseth sin", &c but he didn't get to the heart of the subject, only skimmed along the surface. Fred Harvey of Galt called to see Willie. He is one of Willie's classmates in "Tech", and like Willie, is spending his vacation at home - a great boy - over six feet tall Willie looks small beside him, and he is an only son. Rev. Thomas had an obituary notice of Mrs. Nelmes. Received letter from Horace. (T.S.R. 54. 2 P.M. 92. S.S. 76.)

1889. July 22. Monday. Have written today to the Boston children, and received letters from Mr. Pascoe and Hannah. Mr. Pascoe is at Ferndale under the Dr.'s care, and very sick. He says the doctor thinks he has congestion of the lungs, and the weather there is very unfavorable for that trouble - they have scarcely seen the sun in two weeks' time for the fog. Hannah and Ada and the rest are still at Green Harbor, Marshfield, and Mr. Cooke is getting better. Nellie Locke seems to have the mumps. (T.S.R. 53. 2 P.M. 82. S.S. 68.)

July 23. Tuesday. Eunice and Hattie Covert went to Chaparral to visit the Miners living on our place. Received letters from Ida, also from Uncle. Ida is thoroughly anxious about Mr. Pascoe's health - he breathes with such difficulty - and she says she fears they cannot remain in that climate. (T.S.R. 45. 2 P.M. 81. S.S. 67.)

July 25. Thursday. Wrote to Ida and Mr. Pascoe. Willie has begun a war of extermination on the squirrels that infest the chicken yards. They carry off and destroy many eggs. We have had seven to eat, that he has killed, and he knows he killed a number that he could not get, as they are so nimble in getting into their holes even after they are shot and mortally wounded. Their flesh has much the flavor of chickens, because they have eaten so many eggs. (T.S.R. 49. 2 P.M. 80. S.S. 67.)

July 26. Friday. Have received letters from Hannah, Ada, Lilly Greve and Uncle. Ada and Mr. Cooke have accepted the invitation of Mrs. Blanchard - Eunice's mother - to make their headquarters at her home in Brockton, while they remain in the East. Mr. Cooke is fast improving in health. (T.S.R. 50. 2 P.M. 87. S.S. 75.)

July 28. Sabbath. Attended meeting and S. school this morning. Rev. Thomas preached from the 23rd Psalm, but not so beautifully as I once heard Dr. McLean at Yosemite Chapel. We came