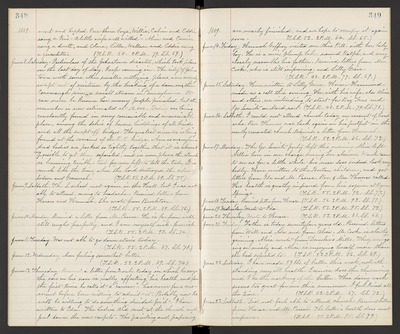 June 8. Saturday. Particulars of the Johnstown disaster, which took place on the last day of May, keep coming in. The city of Johnstown with some other smaller outlying places, were nearly swept out of existence by the breaking of a dam on the Conemaugh river, a small stream in Pennsylvania. It can never be known how many people perished, but the number is now estimated at 12,000. Bodies are being constantly found in every conceivable and inconceivable place, among the debris of houses, buildings of all kinds and all the swept-off bridges. The greatest number is being found at the remains of the R.R. bridge, where so many hundred bodies are packed so tightly together that it is almost possible to get them separated, and in some places, the stench is becoming terrible. But few were left to tell the tale. It is much like the time when "the Lord destroyed the cities of Sodom and Gomorah". (T.S.R. 51. 2 P.M. 89. S.S. 75.)

June 13. Thursday. Received a letter from Uncle today in which he says the sore on his nose is really affecting his health, and for the first time he calls it a "cancer" - has never for a moment before been willing to admit it. Probably now he will be willing to do something decided for it. I have written to Ida. The Ladies Aid met at the church and put down the new carpets. The painting and papering

June 17. Monday. The Yo-Semite party left this morning. Alice left Nellie here in our charge during her absence. Uncle came to see us for a little while - his nose does indeed look very badly. Have written to the Boston children, and got letters from Ida and Mr. Pascoe. Rev. & Mrs. Thomas called. His health is greatly improved from his sojourn at Byron Springs. (T.S.R. 55. 2 P.M. 92. S.S. 77.)

June 21. Friday. Father is today seventyfour years old.Received letters from Will and Ada and from Alice. Mr. Cooke is slowly gaining. Alice wrote from Dunbar's Mills. They are going on nicely and Alice is enjoying herself more than she had expected to. (T.S.R. 52. 2 P.M. 86. S.S. 69.)