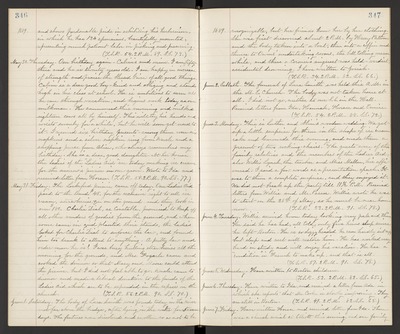 May 30. Thursday. Our birthday again - Calvin and mine. I am fiftythree and he is twenty years old. I am happy in increase of strength and praise the blessed Giver of all good things. Calvin is a dear good boy - kind and obliging and stands high in his class at school. He is ambitious to earn all he can through vacation, and begins work today as our milkman. He commenced this morning and milked eighteen cows all by himself. This will try his hands and wrists severely for a while, but he will soon get used to it. I received six birthday presents - among them were six napkins and a silver napkin ring from Uncle and a shopping purse from Alice, who always remembers my birthday. She is a dear, good daughter. At her house the ladies of the "Ladies Aid" are today making ice cream for the morrow's picnic in our grove. Wrote to Ida and received letter from Horace. (T.S.R. 58. 2 P.M. 90. S.S. 77.)

May 31. Friday. The Lockeford picnic came off today. Our Ladies Aid paid to the Band $45. for the exclusive right to sell ice cream, strawberries, &.c. on the ground and they took in over $180. Charlie Dial, as Constable, promised to keep off all other venders of goodies from the ground, and when some came in and planted their stands, the ladies looked for Charlie Dial to enforce the law, and found him too drunk to attend to anything. A pretty law and order man he is! I was busy hulling strawberries all the morning for the grounds, and Mrs. Fogarle came and cooked the dinner so that Mary and Moore could attend the picnic, but I did not feel able to go. Uncle came to dinner and made a liberal donation to the funds of the Ladies Aid, which are to be expended in the repairs on the church. (T.S.R. 56. 2 P.M. 90. S.S. 70.)

June 1. Saturday. The body of Lura Smith was found today in the river not far above the bridge, after lying in the water for seven days. The features were discolored and swollen so as not to be

1889. recognizable, but her friends knew her by her clothing. She was first discovered about 2 P.M. by Harry Patton, and the body taken into a boat, then into a coffin and thence to Owens' undertaking rooms, the bell tolling meanwhile, and there a Coroner's inquest was held - verdict, accidental drowning. I have written to Josiah. (T.S.R. 34. 2 P.M. 82. S.S. 66.)

June 3. Monday. This is Luther and Alice's wooden wedding. We got up a little surprise for them in the shape of ice cream cake and lemonade this evening, and made them a present of two rocking-chairs. The guests were of the family relatives and the members of the Ladies Aid, also Willis Lynch, the teacher and Miss Mallon, his affianced. I said a few words as a presentation speech. It was to them a complete surprise, and they enjoyed it. We did not break up the party till 11 1/2 P.M. Received letters from Willie and Mr. Pascoe. Willie wrote he was to start on the 28th of May, so he must be near home now. (T.S.R. 53. 2 P.M. 91. S.S. 78.)

June 4. Tuesday. Willie arrived home today looking very pale and thin. He said he has had, all told, only five hours sleep since he left Boston. He is so dizzy headed he can hardly sit up, but sleep and rest will restore him. He has worked very hard in study and will enjoy his vacation. He has a "condition" in French to make up, and that is all (T.S.R. 57. 2 P.M. 91. S.S. 78.)

June 7. Friday. Have written Horace and received letter from Ida. There was a church social at Elliott this evening, and our family