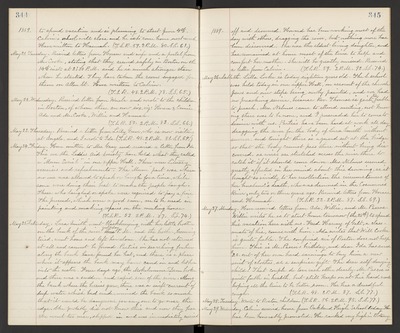 May 24. Friday. Have written to Mrs. Gray and received a letter from Ida. This we the Ladies Aid Society have held what they called a "Mum Social" in our upper Hall. There were Literary exercises and refreshments. The "Mum" part was where no one was allowed to speak or laugh for a time, while some were doing their best to make the people laugh. Those who laughed or spoke were required to pay a fine. The proceeds, which were a good sum, are to be used in painting and making repairs on the meeting house. (T.S.R. 53. 2 P.M. 87. S.S. 74.)

May 25. Saturday. Lura Smith went blackberrying with her little brother on the bank of the river yesterday P.M. and the brother, becoming tired, went home and left her alone. She has not returned at all and cannot be found. Parties in searching for her along the bank have found her hat, and there is a place where it appears the bank may have caved in and let her into the water. Four days ago, the Mokelumne Dam broke and there was a sudden and rapid rise of the river. Along the bank where the berries grew, there was a swift current of deep water which had undermined the bank so much that it would be dangerous for anyone to go near the edge. She probably did not know this and now they fear she went too near, slipped in and was immediately carried

1889. off and drowned. Howard has been working most of the day with others, dragging the river, but nothing more has been discovered. She was the eldest living daughter, and has remained at home most of the time to help and comfort her mother. She will be greatly missed. Received a letter from Calvin. (T.S.R. 59. 2 P.M. 92. S.S. 74.)

May 26. Sabbath. Lilla Locke is today eighteen years old. The S. school was held today in our upper Hall, on account of the church Jews and new steps being newly painted, and we had no preaching service, because Rev. Thomas is quite too feeble to preach. Mrs. Nelmes came to attend meeting, not knowing there was to be none, and I persuaded her to come to dinner with us. Parties have been hard at work all day dragging the river for the body of Lura Smith without success, and tonight there is a guard set at the bridge so that the body cannot pass there without being discovered, as wires are stretched across the river there to catch it if it should come down. Mrs. Nelmes seemed greatly affected in her mind about this drowning, as it brought so vividly to her recollection the circumstances of her husband's death, who was drowned in the Cosumnes River, only two or three years ago. Received letters from Horace and Hannah. (T.S.R. 52. 2 P.M. 87. S.S. 69.)

May 27. Monday. Have received letters from Ada, Willie, and Mr. Pascoe. Willie writes he is to start home tomorrow (the 28th) to spend his vacation here with us. Fred. Harvey of Galt, a classmate of his, comes with him. Ada writes that Will Cooke is quite feeble. The confined air of Boston does not help him. This is Mr. Pascoe's birthday, and dear Ida has saved $20. out of her own hard earnings to buy him a new suit of clothes, as a surprise gift. The dear self-denying child! That couple do love each other dearly. Mr. Pascoe is quite feeble in health but still keeps on at his hard work hoping all the time to be better soon. he has a dreadful cough. (T.S.R. 48. 2 P.M. 87. S.S. 77.)

May 29. Wednesday. Calvin arrived home from Oakland High School today. He has been honorably promoted. He ranked very high in Botany.