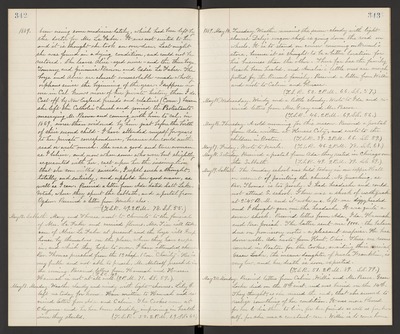 1889. been using some medicine lately, which had been left by the doctor for Mr. Le Faber. It was not suited to her and it is thought she took an overdose. Last night she was found in a dying condition, and could not be restored. She leaves Alice - aged nine - and the three boys, Tommy and Jinnmie Brown and Eddie Le Faber. The boys and Alice are almost inconsolable - made wholly orphans since the beginning of the year. I suppose no one in Cal. knows more of her private history than I do. Cast off by New England friends and relatives (Coun.) because she left the Catholic Church and joined the Protestants - marrying Mr. Brown and coming with him to cal. in 1869, worse than widowed by him just before the birth of their second child - I have attended myself for years to her private correspondence, because she could neither read or write much. She was a good and true woman, as I believe, and now when some who were but slightly acquainted with her, cast upon her the insinuation that she committed suicide, I repel such a thought, totally and entirely, and uphold her good name, as well as I can. Received a letter from Ada dated Salt Lake, Utah, where they spent the Sabbath, and a postal from Ogden. Received a letter from Uncle also. (T.S.R. 49. 2 P.M. 78. S.S. 55.)

May 12. Sabbath. Mary and Theresa went to Clements to the funeral of Mrs. Le Faber and carried flowers. Mrs. Tice will take care of Alice Le Faber at present and the boys will keep house by themselves on the place, where they have crops in, and which they hope to own. I have attended church. Rev. Thomas preached from the 13 chap. 1 Cor. "Charity". He is very feeble and not able to preach. Mr. Metcalf preached in the evening. Received letters from Hannah and Horace. Hannah is not at all well. (T.S.R. 49. 2 P.M. 71. S.S. 59.)

May. 13. Monday. Weather cloudy and windy with light showers. Lily G. left us today for home. Have written to Hannah and received letters from Ada and Calvin. The Cookes were at Cheyenne and he has been steadily improving in health since they started. (T.S.R. 52. 2 P.M. 69. S.S. 60.)

1889. May 14. Tuesday. Weather remains the same cloudy with light showers. Daly's wagon shop is going down the road on wheels. It is to stand on corner cornering on Bruml's store, because it is thought to be a better location for his business than other. Thus far has the family breach been healed, and Amelia's little ones are much petted by the Bruml family. Received a letter from Willie and wrote to Calvin and Horace. (T.S.R. 50. 2 P.M. 66. S.S. 57.)

May 19. Sabbath. The Sunday school was held today in our upper Hall on account of painting the church. No preaching, as Rev. Thomas is too poorly. I had headache and could not attend S. school. There was a shock of earthquake at 2:45 A.M. and it woke me, left me dizzy headed and I though gave me the headache. It was quite a severe shock. Received letters from Ada, Ida, Hannah and Bro. Josiah. The latter sent me $1000. - the balance due on promissory notes - a pleasant surprise. He has done well. Ada wrote from Kent, Ohio! There are rooms secured in Boston for the Cookes, awaiting their arrival Grace Locke, the insane daughter of Uncle Franklin, is very low, and her death is soon expected. (T.S.R. 51. 2 P.M. 89. S.S. 79.)

May 20. Monday. Received letters from Calvin, Willie and Mr. Pascoe. Grace Locke died on the 11th inst. and was buried on the 14th. They thought, as she neared the end, that she seemed to realize something of her condition. It was more blessed for her to die than to live, for her friends as well as for herself, for she was a constant care. Willie is to come home