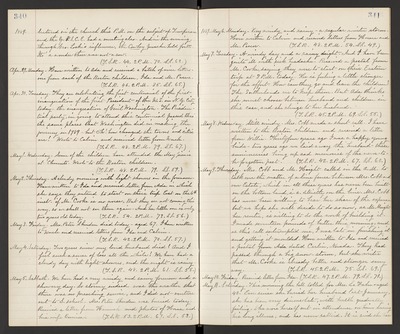 Apr. 30. Tuesday. They are celebrating the first centennial of the first inaugeration of the first President of the U.S. in N.Y. City today the inaugeration of Geril Washington. The Presidential party, in going to attend this centennial passed this the same places that Washington did in making the journey in 1789 - but Oh! how changed the towns and cities are! Wrote to Calvin and received letter from Uncle. (T.S.R. 48. 2 P.M. 79. S.S. 67.)

May 2. Thursday. A cloudy morning with light showers in the forenoon. Have written to Ida and received letter from Ada in which she says they intend to start on their trip East on the 6th inst. if Mr. Cooke is no worse. But they are not coming this way, so we shall not to see them again. And her little one is only two years old today. (T.S.R. 54. 2 P.M. 73. S.S. 56.)

May 5. Sabbath. We have had a very windy and rainy forenoon and a showery day. So stormy indeed was the weather that there was no preaching service, and I did not venture out to S. school. Mrs. Peter Sherden was buried today. Received a letter from Hannah and photos of Horace and his wife Eunice. (T.S.R. 53. 2 P.M. 67. S.S. 53.)

May 7. Tuesday. A windy day and a rainy night. And I have been quite ill with sick headache. Received a postal from Mr. Cooke, saying they were to start on their Eastern trip at 3 P.M. today. He is feeling a little stronger for the effort. How can they go and leave the children! The Sutherlands are to keep them. But Ada thinks she must choose between husband and children in this case, and she clings to her husband. (T.S.R. 45. 2 P.M. 69. S.S. 55.)

May 8. Wednesday. Still windy. Mrs. Cobb made a short call. I have written to the Boston children and received a letter from Willie. Thirtyfour years ago I was a happy, young bride - two years ago we laid away the husband - these anniversaries being up sad memories of the never-to-be forgotten past. (T.S.R. 42. 2 P.M. 67. S.S. 60.)

May 9. Thursday. Mrs. Cobb and Mr. Haight called in the A.M. to talk over the matter of a line fence between Mrs. Cobb and our Estate, which in all these years has never been built on the bottom land, i.e. strictly on the line. Mrs. Cobb has never been willing to bear her share of the expense but we hope she will decide to do so now, as Mr. Haight her renter, is willing to do the work of building it. I made seventeen pounds of butter this morning, and as this call interrupted me, I was late in finishing it and getting it moulded. Have written to Ida and received a postal from Ada dated Carlin, Nevada. They had passed through a big snow-storm, but she writes that Mr. Cooke is already better and stronger every way. (T.S.R. 45. 2 P.M. 75. S.S. 69.)

May 11. Saturday. This morning the bell tolled for Mrs. Le Faber - aged 40. Ever since she buried her husband last January, she has been very disconsolate, with health gradually failing. She wore herself out in attendance on him during his long illness, and has never rallied. It is said she has