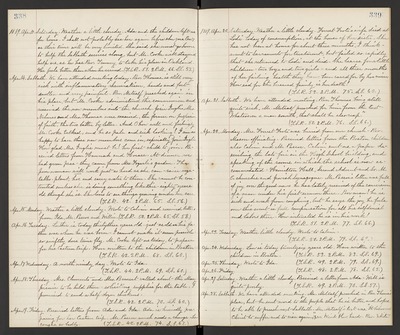 1889. Apr. 13. Saturday. Weather a little cloudy. Ada and the children left us for home. I shall not probably see her again before she goes East, as their time will be very limited. She said she must go home to help the Sabbath services along, but Mr. Cooke will stay and help us, as he has Rev. Tenney to take his place in Oakland. He feels better than when he arrived. (T.S.R. 51. 2 P.M. 66. S.S. 53.)

Apr. 14. Sabbath. We have attended meeting today. Rev. Thomas is still very sick with inflammatory rheumatism, hands and feet swollen and very painful. Rev. Metcalf preached again in his place, but Mr. Cooke administered the communion and received the non-members into the church. Josie Inglis, Mrs. Nelmes and Mrs. Thomas were received, the former on profession of faith, the two latter by letter. And O how well and feelingly Mr. Cooke talked, and he so pale and sick looking! I am so happy to have these new members come in, especially Josie Inglis. How glad Mrs. Inglis must be! her first child to join. Received letters from Hannah and Horace. At dinner we had green - peas they came from Mrs. Fogarle's garden. The poor woman will work just as hard as she can - raise vegetables - plant, hoe and carry water to them. She cannot be contented unless she is doing something like this - eighty years old though she is. She loves to see things growing under her case. (T.S.R. 42. 2 P.M. 65. S.S. 56.)

1889. Apr. 20. Saturday. Weather a little cloudy. Forrest Foote's wife died at Lodi today of consumption, at the house of her sister. She has not been at home for about three months, I think - went to Sacramento for treatment, but failed so rapidly that she returned to Lodi and died. She leaves four little children - two boys and two girls - and all these months of her failing health they have been cared for by her niece. How sad for the bereaved family is her death! (T.S.R. 52. 2 P.M. 75. S.S. 60.)

Apr. 22. Monday. Mrs. Forrest Foote was buried from our church Rev. Mason officiating. Received letters from the Boston children also Calvin and Mr. Pascoe. Calvin sent us a paper describing the late fire in the High School building, and speaking of the rooms in which the school is now accommodated - Hamilton Hall, Second Advent and Sc. M. E. churches and Jewish Synagogue. Mr. Pascoe's letter was full of joy over the good news he has lately received of the conversion of a man under his first sermon there. Poor man! he is sick and weak from coughing, but he says the joy he feels over this event is full compensation for all his selfdenial and labors there. How interested he is in his work! (T.S.R. 51. 2 P.M. 77. S.S. 66.)

Apr. 28. Sabbath. We have attended meeting. Mr. Metcalf preached in Rev. Thomas place, but he sent word to the people that he is better and hopes to be able to preach next Sabbath. Mr. Metcalf's text was, "It behooved Christ to suffer and to rise again", &.c. Wind blew hard. Rev. White