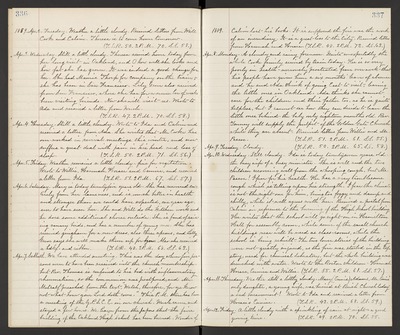 Apr. 3. Wednesday. Still a little cloudy. Theresa arrived home today from her long visit in Oakland, and O how well she looks and how fat she has grown. It was indeed a good change for her. She had Mamie Thorp for company on the train - she has been in San Francisco. Lily Greve also arrived from San Francisco, where she has for a number of weeks been visiting friends. Now she will visit us. Wrote to Ada and received a letter from Uncle. (T.S.R. 47. 2 P.M. 70. S.S. 58.)

Apr. 4. Thursday. Still a little cloudy. Wrote to Ida and Calvin and received a letter from Ada. She writes that Mr. Cooke has over worked in several meetings this winter, and now suffers a great deal with pain in his head and loss of sleep. (T.S.R. 50. 2 P.M. 71. S.S. 56.)

Apr. 6. Saturday. Mary is today twentyfive years old. She has recovered entirely from her lameness, and is much better in health and stronger than we could have expected, one year ago, ever to have seen her. She and Will do the kitchen work and he does some additional chores outside. She is fond of raising canary birds, and has a number of young ones. She has received gingham for new dress, also three aprons, and Lilly Greve says she will make them up for her. Also she received a hdkf. and ribbon. (T.S.R. 48. 2 P.M. 68. S.S. 63.)

Apr. 7. Sabbath. We have attended meeting. This was the day when five persons were to have been received into the church membership but Rev. Thomas is confined to his bed with inflammatory rheumatism, so the communion was postponed, and Mr. Metcalf preached from the text, "Watch, therefore, for ye know not what hour your Lord doth come." This P.M. there has been a meeting of the Y.P.S.C.E. in our church. Uncle came and stayed a few hours. We learn from the papers that the fine building of the Oakland High School has been burned. Wonder if

Apr. 8. Monday. a cloudy and rainy forenoon. Quite unexpectedly the whole Cooke family arrived by train today. He is so very poorly in health - nervously prostrated from over work - that his people have given him a six months' leave of absence and he and Ada think of going East to visit, leaving the little ones in Oakland. Ada thinks she cannot care for the children and their father too, as he is quite helpless, but I cannot see how they can decide to leave the little ones behind - the baby only eighteen months old. Rev. Tenney will supply the pulpit of the Golden Gate Church while they are absent. Received from Willie and Mr. Pascoe. (T.S.R. 51. 2 P.M. 61. S.S. 55.)

Apr. 10. Wednesday. Still cloudy. Ida is today twentyseven years old - the busy wife of a busy minister. She is well and the two children recovering well from the whooping cough, but Mr. Pascoe! I fear for his health. He has a very troublesome cough which is telling upon his strength. I fear the climate is not the right one for him, being too foggy and damp and chilly, while it well agrees with her. Received a postal from Calvin in reference to the burning of the High School building. He writes that the school will go right on in Hamilton Hall for assembly room, while some of the small church buildings near will be used as class-rooms, while the school is being rebuilt. The two lower stories of the building were not greatly injured, as the fire was started in the top story, used for chemical laboratory, but the whole building was drenched with water. Wrote to the Boston children - Hannah Horace, Eunice and Willie. (T.S.R. 55. 2 P.M. 61. S.S. 57.)