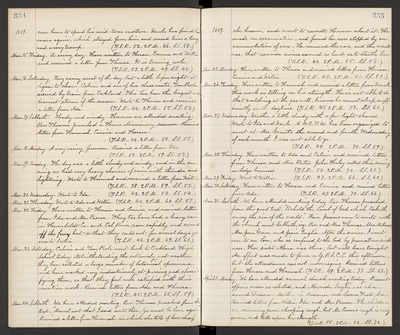 Mar. 16. Saturday. Very rainy most of the day, but a little before night it began to clear. Calvin and one of his classmates, Tom Prole, arrived by train from Oakland. This has been the longest and heaviest storm of the season. Wrote to Theresa and received a letter from Ada. (T.S.R. 46. 2 P.M. 55. S.S. 53.)

Mar. 22. Friday. Have written to Horace and Eunice and received letters from Ida and Mr. Pascoe. They too have had a heavy rain in Humboldt Co. and Eel River rose rapidly and carried off the fury but so that they could not for several days go over to Scotia. (T.S.R. 40. 2 P.M. 60. S.S. 61.)

Mar. 23. Saturday. Calvin and Tom Prole went back to Oakland High School today. Notwithstanding the extremely wet weather they have collected a large number of botanical specimens, and have worked very industriously at pressing and classifying them, so that they feel well satisfied with their vacation work. Received letters from Ada and Theresa. (T.S.R. 45. 2 P.M. 65. S.S. 59.)

Mar. 24. Sabbath. We have attended meeting. Rev. Thomas preached from the text, "Marvel not that I said into thee, Ye must be born again". Received a letter from Hannah, in which she tell of how deaf

Mar. 26. Tuesday. Have written to Hannah and received a letter from Uncle. His work is telling on his strength. He is not able to do that watching at the gas well, because he cannot sleep sufficiently in the daytime. (T.S.R. 45. 2 P.M. 73. S.S. 60.)

Mar. 31. Sabbath. We have attended meeting today Rev. Thomas preached from the good text, "Behold the Lamb of god which taketh away the sin of the world". Five persons were to unite with the church next Sabbath, viz: Rev. and Mrs. Thomas, Mrs. Nelmes, Mrs. Jane Green and Josie Inglis. After the service, I went over to see Lou, who is confined to the bed by premature sickness. Her sister Alma was there, but will leave tonight. An effort was made to form a Y.P.S.C.E. this afternoon, but the attendance was not encouraging. Received letters from Horace and Hannah. (T.S.R. 49. 2 P.M. 77. S.S. 68.)