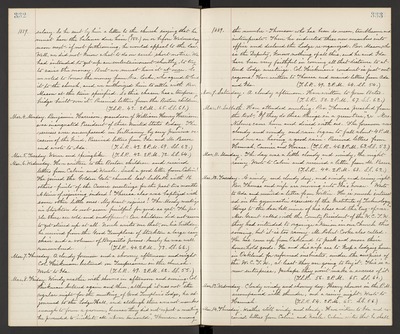 1889. salary. So he sent by him a letter to the church saying that he must have the balance due him ($150.) on or before Wednesday noon next - if not forthcoming, he would appeal to the law. Well, we did not know what to do on such short notice. We had intended to get up an entertainment shortly, to try to raise the money. But we must have it at once. So we voted to borrow the money from Geo. Locke, who agreed to lend it to the church, and we authorized him to settle with Rev. Mason at the time specified. So this chasm has a temporary bridge built over it. Received letters from the Boston children. (T.S.R. 43. 2 P.M. 65. S.S. 61.)

Mar. 4. Monday. Benjamin Harrison, grandson of William Henry Harrison, was inaugurated President of these United States today. The exercises were unsurpassed in brilliancy by any previous occasion of the kind. Received letters from Ida and Mr. Pascoe and wrote to Ada. (T.S.R. 43. 2 P.M. 69. S.S. 63.)

Mar. 6. Wednesday. Have written to the Boston children and received letters from Calvin and Uncle. Such a good letter from Calvin! He joined the Golden Gate church last Sabbath with 16 others - fruits of the Currie meetings for the past two months. A time of rejoicing indeed! Theresa also was baptized with some other little ones. My heart rejoices! The Moody meetings in Stockton do not seem fruitful for good as yet. The people there are cold and indifferent. Our children did not seem to get stirred up at all. Uncle writes me that, on his birthday, he received from the Good Templars of Stockton a large easy chair and a volume of Bryant's poems. Surely he was well remembered. (T.S.R. 44. 2 P.M. 73. S.S. 66.)

Mar. 8. Friday. Windy weather with showers in afternoon and evening. Col. Hickman lectured again and then, although it was not the regular night for the meeting of Good Templar's Lodge, he adjourned to the Lodge Hall, and although there were not members enough to form a quorum, because they did not expect a meeting, he proceeded to initiate all "whom he would", Thomson among

1889. the member. Thomson who has been so mean, troublesome and intemperate. Then he inducted these new members into office and declared the Lodge re-organized. Rev. Mason, who is the Deputy, knows nothing of all this, and he and Ida have been very faithful in coming all that distance to attend Lodge meetings. Col. Hickman's conduct is just outrageous! Have written to Theresa and received letters from Ada and Ida. (T.S.R. 49. 2 P.M. 64. S.S. 54.)

Mar. 10. Sabbath. Have attended meeting. Rev. Thomas preached from the text. "If they do these things in a green tree", &c Mrs. Nelmes came home and dined with us. The forenoon was cloudy and windy and rain began to fall about 4 P.M. and we are having a good rain. Received letters from Hannah, Eunice and Horace. (T.S.R. 46. 2 P.M. 63. S.S. 53.)

Mar. 12. Tuesday. A windy and cloudy day, and windy and rainy night. Rev. Thomas and wife are moving into Ida's house. Wrote to Ada and received a letter from Willie. He is much interested in the gymnastic exercise of the Institute of Technology - belongs to the base ball nine of his class and the "tug-of war". Mrs. Grant called with the County President of the W.C.T.U. they had intended to organize a Union in our Church this evening, but it is too rainy. Mr. Robert Cooke also called. He has come up from Oakland to pack and move their household goods. He and his wife are to keep a lodging house in Oakland for reformed inebriates, under the auspices of the W.C.T.U., at least they are going to try it. This is a new enterprise, perhaps they won't make a success of it. (T.S.R. 56. 2 P.M. 65. S.S. 60.)

Mar. 14. Thursday. Weather still windy and cloudy. Have written to Ida and received letters from Calvin and Uncle. Calvin writes that he shall