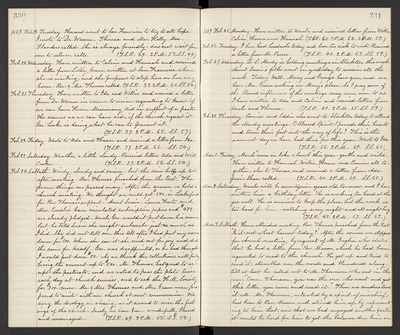 Feb. 21. Thursday. Have written to Ida and Willie and received a letter from Dr. Warren in answer to mine requesting to know if we can have Home Missionary Aid in support of a pastor. He assures us we can have aid, if the church request it. Geo. Locke is doing what he can to prevent it. (T.S.R. 37. 2 P.M. 65. S.S. 57.)

Feb. 24. Sabbath. Windy, cloudy and rainy, but the rain held up till after meeting. Rev. Thomas preached from the text, "The former things are passed away." After the sermon we held a church meeting. We thought we could get $500 in Lockeford for Rev. Thomas's support. Aunt Susie, Laura Foote and Mrs. Emslie have circulated subscription papers and $473. are already pledged. Uncle Geo. wouldn't put down his name but he told Susie she might subscribe just as much as I did. She did not tell me this till after I had put my name down for $100. When she saw it she cried out for joy and did the same for herself. Geo. was disappointed, as he had thought I would put down $50. As we think the collections will fully bring the amount up to $500. Mr. Thomas has agreed to accept the pastorate, and we voted to pass the plate twice each day at church service, and to ask the H.M. Society for $300. more. Mr. & Mrs. Thomas and Mrs. Green were proposed to unite with our church at next communion. We sang the doxology in closing, as it seemed to voice the feelings of the church. Surely we have been wonderfully blessed and encouraged. (T.S.R. 49. 2 P.M. 55. S.S. 52.)

Feb. 27. Wednesday. D. L. Moody is holding meetings in Stockton this week. Aunt Susie's folks went in yesterday to remain all the week. Today Will, Mary and George have gone, and we have Mrs. Green cooking in Mary's place. So I pray some of the blessed influences of the meetings may come even to us. I have written to Ada and Calvin and received letters from Uncle and Theresa. (T.S.R. 40. 2 P.M. 65. S.S. 59.)

Feb. 28. Thursday. Eunice and Eddie also went to Stockton today to attend the Moody meetings. O Blessed Spirit! pervade their hearts and turn their feet into the way of life! This is the warmest day we have had thus for this year. Wrote to Ida. (T.S.R. 36. 2 P.M. 69. S.S. 60.)

Mar. 2. Saturday. Uncle will be seventynine years old tomorrow, and I have written him a birthday letter. He is working too hard at the gas well. he is anxious to keep the place, but the work is too hard for him, - watching every night and all night long. (T.S.R. 43. 2 P.M. 67. S.S. 63.)

Mar. 3. Sabbath. Have attended meeting. Rev. Thomas preached from the text. "Is it not wheat harvest today?" After the service we stopped for church meeting, by request of Mr. Inglis, who stated that he had a letter from Rev. Mason, which he had been requested to read to the church. He got up and tried to read it, stumbled over the words and blundered along, till at last he called out to Mr. Thomson, who sat in the rear, "Come, Thomson, you was the one who went and got this letter, you come and read it." Then we understood it all. Mr. Thomson, actuated by a spirit of mischief, had been to Rev. Mason and stirred him of by representing to him that, now that we had engaged another pastor it would be hard for him to get the balance due him on