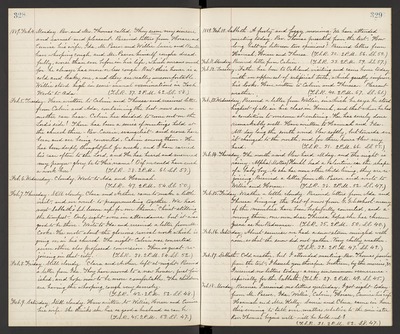 1889. Feb. 4. Monday. Rev. and Mrs. Thomas called. They sum very sincere and earnest and pleasant. Received letters from Horace and Eunice his wife, Ida, Mr. Pascoe and Willie. Susie and Benton have whooping cough, and Mr. Pascoe himself coughs dreadfully, worse than ever before in his life, which means much, for he always has more or less cough. But their house is a cold and leaky one, and they are really uncomfortable. Willie stood high in semi-annual examinations in Tech. Wrote to Ada. (T.S.R. 37. 2 P.M. 62. S.S. 58.)

Feb. 5. Tuesday. Have written to Calvin and Theresa and received letters from Calvin and Ada, containing the best news ever a mother can hear. Calvin has decided to come out on the Lord's side! There has been a series of meetings held at the church there - Rev. Currie, evangelist - and scores have been and are being converted, Calvin among them. He has been deeply thoughtful for weeks, and I have carried his case often to the Lord, and He has heard and answered my prayer - glory be to His name! O if we could have such a work here! (T.S.R. 38. 2 P.M. 61. S.S. 53.)

Feb. 7. Thursday. Still cloudy. Clara and Arthur came to make a little visit, and we went to prayermeeting together. We had next Sabbath S.S. lesson up for our theme, "Christ stilling the tempest." - Only eight were in attendance but it was good to be there. Wrote to Ida and received a letter from Mr. Cooke. He wrote about the glorious revival work which is going on in his church. The night Calvin was converted seven others also professed conversion. There is great rejoicing in that city. (T.S.R. 38. 2 P.M. 54. S.S. 52.)

Feb. 8. Friday. Still cloudy. Clara and Arthur left at night. Received a letter from Ida. They have moved to a new house, just finished, and hope now to be more comfortable. The children are having the whooping cough very severely. (T.S.R. 42. 2 P.M. 52. S.S. 48.)

Feb. 12. Tuesday. Father has been to Oakland visiting and came home today with in upper set of artificial teeth, which greatly improve his looks. Have written to Calvin and Theresa. Pleasant weather. (T.S.R. 40. 2 P.M. 67. S.S. 61.)

Feb. 13. Wednesday. Received a letter from Willie, in which he says he stood highest of all in his class in French, and that when he had a condition to overcome at entering. He has surely done remarkably well. Have written to Hannah and Ida. All day long the south wind blew softly, but towards eve it changed to the north, and for three hours blew very hard. (T.S.R. 38. 2 P.M. 66. S.S. 55.)

Feb. 15. Friday. Weather a little cloudy. Received letters from Ada and Theresa bringing the best of news from G.G.S. school - many of the members have been hopefully converted, and among them, our own dear Theresa hopes she has chosen Jesus as her Redeemer. (T.S.R. 35. 2 P.M. 50. S.S. 40.)

Feb. 18. Monday. Because I received no letters yesterday, I got eight today - from Mr. Pascoe, Ida, Willie, Calvin, Horace, Eunice his wife Hannah and Mrs. Kelly. Susie and Clara came in here this evening to talk over matters relative to the minister. Rev. Thomas begins well - will he hold out? (T.S.R. 31. 2 P.M. 52. S.S. 47.)