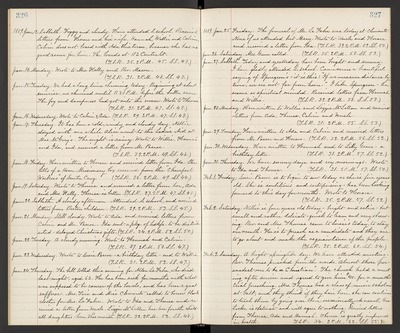 Jan. 24. Thursday. The bell tolled this morning for Allen Le Faber, who died last night, aged 62. He has been sick for months with what was supposed to be cancer of the bowels, and has been a great sufferer. Mrs. Tice and Miss Clements called to borrow black clothes for Mrs. Le Faber. Wrote to Ida and Theresa and received a letter from Uncle. Lizzie McLellan has been fourth child - all daughters - born this month. (T.S.R. 32. 2 P.M. 52. S.S. 48.)

Jan. 27. Sabbath. Today and yesterday have been bright and sunny. I have gladly attended S. school. Came across a beautiful saying of Spurgeon's - it is this : "If we measure distance by time, we are not far from home". I like Spurgeon - he seems so spiritual minded. Received letters from Hannah and Willie. (T.S.R. 33. 2 P.M. 58. S.S. 53.)

Feb. 2. Saturday. Nellie is four years old today - bright and active - but small and rather delicate - quick to learn and very observing. Rev. and Mrs. Thomas came to Susie's today, to stay one month. He is to preach as a candidate and they are to go about and make the acquaintances of the people. (T.S.R. 35. 2 P.M. 60. S.S. 54.)

Feb. 3. Sunday. A bright springlike day. We have attended meeting. Rev. Thomas preached from the words, "Almost thou persuadest me to be a Christian". The church held a meeting after service and agreed to give him $40. for a month's trial preaching. Mrs. Thomas has a class of music scholars at Galt, and they think if they live here, she can continue to teach them by going over there occasionally. As usual, Geo. Locke is obstinate and will agree to nothing. Received letters from Theresa, Ada and Hannah. Theresa is greatly improved in health. (T.S.R. 34. 2 P.M. 62. S.S. 55.)