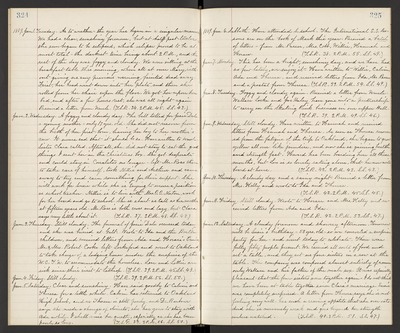 1889. Jan. 1. Tuesday. As to weather - the year has begun in a singular manner. We had a clear, sunshiny forenoon, but at half-past-twelve the sun began to be eclipsed, which eclipse proved to be almost total - the darkest time being about 2 P.M., and the rest of the day was foggy and cloudy. We were sitting at the breakfast table this morning, when all at once Mary, without giving us any previous warning, fainted dead away. First, her head went down into her plate, and then she rolled from her chair upon the floor. We got her upon her bed, and after a few hours rest, she was all right again. Received a letter from Uncle. (T.S.R. 34. 2 P.M. 45. S.S. 43.)

Jan. 2. Wednesday. A foggy and cloudy day. The bell tolled for Josie Dale a young mother - only 17 yrs. old. She did not recover from the birth of her first-born, leaving her boy to her mother's care. It seems sad that it should be so. Have written to Uncle. Sister Clara called. After all, she did not stay to eat the good things I sent her in the Christmas box. She got desperate and could stay in Corralitos no longer - left Mr. Ross then to take care of himself, took Nettie and Arthur and came away to try and earn something for their support. She will work for Susie while she is trying to secure a position as school teacher. Nettie is to live with Mrs. O.O. Norton, work for her board and go to school. She is about as tall as her mother at fifteen years old. Mr. Ross is both cross and lazy, but Clara says very little about it. (T.S.R. 37. 2 P.M. 48. S.S. 43.)

Jan. 3. Thursday. Still cloudy. The funeral of Josie Dale occurred today and she was buried at Galt. Wrote to Ida and the Boston children, and received letters from Ada and Horace's Eunice. Mr. & Mrs. Robert Cooke left Lockeford and went to Oakland to take charge of a lodging house under the auspices of the W.C.T.U. to accommodate the homeless. Lou and Lottie are sick since their visit to Lathrop. (T.S.R. 39. 2 P.M. 45. S.S. 43.)

Jan. 5. Saturday. Clear and sunshiny. Have said goodbye to Calvin and Theresa for a little while. Calvin returned to Oakland High School, and as Theresa is still poorly, and Dr. Barbour says she needs a change of climate, she has gone to stay with Ada awhile. I shall miss her greatly, especially as she has been poorly so long. (T.S.R. 33. 2 P.M. 56. S.S. 50.)

Jan. 8. Tuesday. Foggy and cloudy again. Received a letter from Uncle. Wallace Locke and Joe Haley have gone into a partnership to carry on the Skating Rink business in our upper Hall. (T.S.R. 39. 2 P.M. 49. S.S. 46.)

Jan. 9. Wednesday. Still cloudy. Have written to Hannah and received letters from Hannah and Theresa. As soon as Theresa recovered from the fatigue of the trip to Oakland, she began to grow yellow all over like jaundice, and now she is gaining health and strength fast. Howard has been boarding here all these months, but Lou is so lonely eating alone, that he will board at home. (T.S.R. 42. 2 P.M. 43. S.S. 43.)

Jan. 12. Saturday. A cloudy forenoon and showery afternoon. Tomorrow will be Susie's birthday - 50 yrs. old - so we concocted a surprise party for her - and went today to celebrate. There were fully fifty people present. We carried all sorts of food and set a table, and they set us four sisters in a row at the table. The company was composed almost entirely of women only Wallace and his father of the male sex. It was especially pleasant that the four sisters were together again - I do not think we have been at table together since Clara's marriage. Susie was completely surprised. A letter from Theresa says she is not feeling very well has such a craving appetite that she over eats. And she is nervously weak and goes beyond her strength unless watched. (T.S.R. 40. 2 P.M. 51. S.S. 47.)