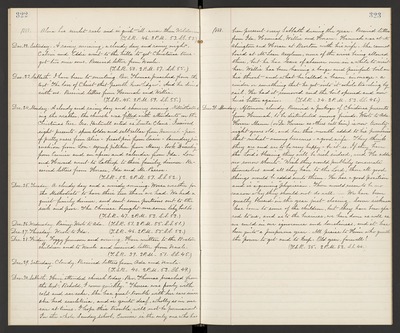 Dec. 24. Monday. A cloudy and rainy day and showery evening. Notwithstanding the weather, the church was filled with attendants on the Christmas tree. Geo. Hartwell acted as "Santa Claus". I received eight presents - spoon holder and salt cellar from Hannah - pair of pretty vases from Alice - breast pin from Susie - laundry pin cushion from Lou - syrup pitcher from Mary - book "Querchy" from Eunice and an apron and calendar from Ida. Lou and Howard went to Lathrop to their family dinner. Received letters from Horace, Ida and Mr. Pascoe. (T.S.R. 52. 2 P.M. 57. S.S. 52.)

Dec. 25. Tuesday. A cloudy day and a windy evening. Worse weather for the Methodists to have their tree than we had. We had a quiet family dinner, and sent some portions out to the sick and poor. The Chinese brought me some lily bulbs. (T.S.R. 47. 2 P.M. 53. S.S. 53.)

Dec. 30. Sabbath. Have attended church today. Rev. Thomas preached from the text, "Behold, I come quickly." Theresa was poorly with cold and earache. She has great trouble with her ears since she had scarletina, and is quite deaf, wholly so in one ear at times. I hope this trouble will not be permanent. In the whole Sunday School, Eunice is the only one who has

1888. been present every Sabbath during the year. Received letters from Ida, Hannah, Willie and Horace. Hannah was at N. Abington and Horace at Brocton with his wife. She cannot board at McLean Asylum, none of the wives being allowed there, but he has leave of absence once in a while to visit her. Willie has been having a large and painful boil on his throat and what he called a "beam" in one eye - a cinder or something that he got into it while traveling by sail. He had it removed and the boil opened and now he is better again. (T.S.R. 34. 2 P.M. 53. S.S. 46.)

Dec. 31. Monday. Afternoon cloudy. Received a package of Christmas presents from Hannah, to be distributed among friends. Wrote to Ada. Horace Mann (or Dr. Horace as others call him) is now twentyeight years old, and has this month added to his possession that richest among treasures - a good wife. They think they are and are to be very happy - be it so. If they have the Lord's blessing they will be rich indeed, and "He adds no sorrow thereto". Wish they would publicly consecrate themselves and all they have to the Lord, then all good things would be added unto them. He has a good position and is a "growing" physician. There would seem to be no reason why they should not do well. - We have been greatly blessed in the year just closing. Severe sickness has come to some of the children, but they have been spared to us, and as to the business, we have done as well as we could in our ignorance and loneliness, and it has been quite a prosperous year. All praise to Him who giveth the power to get and to keep. Old year, farewell! (T.S.R. 35. 2 P.M. 52. S.S. 44.)