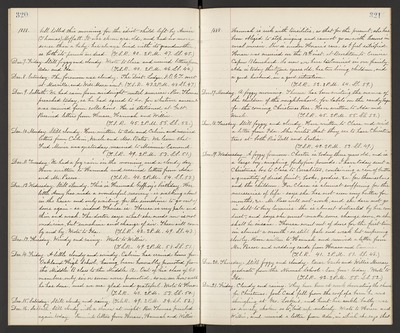 Dec. 9. Sabbath. We had rain from midnight until sunrise. Rev. Thomas preached today, as he had agreed to do, for whatever amount was received from collections. He is stationed at Galt. Received letters from Horace, Hannah and Willie. (T.S.R. 45. 2 P.M. 55. S.S. 52.)

Dec. 12. Wednesday. Still cloudy. This Hannah Geffroy's birthday. Her little Amy has made a wonderful recovery - is walking about in the house and only waiting for the sunshine to go out of doors again - as indeed Theresa is. Theresa is very pale and thin and weak. The doctor says what she needs now is not medicine, but sunshine and change of air. These will come by and by. Wrote to Ida. (T.S.R. 42. 2 P.M. 49. S.S. 43.)

Dec. 14. Friday. A little cloudy and windy. Calvin has arrived home from Oakland High School, having been honorably promoted from the Middle B class to the Middle A. Out of his class of 60 members, only six or seven were promoted, so we see how well he has done, and we are glad and grateful. Wrote to Horace. (T.S.R. 40. 2 P.M. 53. S.S. 50.)

1888. Hannah is sick with tonsilitis, so that for the present, she has been obliged to stop singing and cannot go on with lessons in vocal music. She is under Horace's care, so I feel satisfied. Horace was married on the 12th inst. at Brockton to Eunice Capen Blanchard. So now we have two Eunice's in our family. Ada is today thirtyone years old, has two living children, and a good husband, in a good situation. (T.S.R. 52. 2 P.M. 64. S.S. 59.)

Dec. 19. Wednesday. A foggy forenoon. Chester is today three years old, and is a large boy, weighing forty five pounds. I have today sent a Christmas box to Clara to Coeralitos, containing a can of butter a quantity of dried fruit, books, goodies, &.c. for themselves and the children. For Clara is almost suffering for the necessaries of life - says she has not seen any butter for months, &.c. Mr. Rose will not work, and she dare not go in debt to buy luxuries. She is almost distracted by his conduct, and says she must make some change soon, or she shall be insane. Theresa went out of doors for the first time in almost a month - is still pale and weak but improving slowly. Have written to Hannah and received a letter from Mr. Pascoe and wedding cards from Horace and Eunice. (T.S.R. 41. 2 P.M. 51. S.S. 48.)

Dec. 21. Friday. Cloudy and rainy. They have been at work decorating the church for Christmas. Joel Card fell from the roof of a barn he was shingling at Geo. Locke's, and hurt his ankle badly - was so severely shaken as to be laid up entirely. Wrote to Horace and Willie, and received a letter from Ada, in which she says that