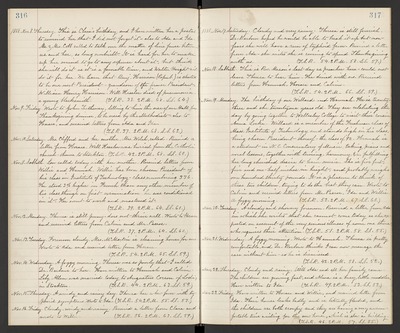 1888. Nov. 8. Thursday. This is Clara's birthday and I have written her a postal to remind her that I did not forget it - also to Ada and Ida. Mr. & Mrs. Cobb called to talk over the matter of line fence between us and her, so long unbuilt. It is hard for her to make up her mind to go to any expense about it, but think she will do it as it is a favorable time, and Walter Hoight will do it for her. We learn that Benj. Harrison (Repub.) is elected to be our next President - grandson of the former President, William Henry Harrison. Will Kessler died of pneumonia. a young blacksmith. (T.S.R. 38. 2 P.M. 68. S.S. 64.)

Nov. 11. Sabbath. Lou called today with her mother. Received letters from Willie and Hannah. Willie has been chosen President of his class in Institute of Technology - class numbering 336. He stood 3% higher in French than any other member of his class, though on first examination he was conditioned in it. He went to work and mastered it. (T.S.R. 39. 2 P.M. 64. S.S. 60.)

Nov. 19. Monday. The birthday of our Willard and Hannah. He is twentythree and she twentyone years old. They are celebrating the day by going together to Wellesley College to visit their cousin Anna Locke. Willard is a member of the Freshman class of Mass. Institute of Technology and stands high in his class, being chosen President thereof - the class of '92. Hannah is a student in N.E. Conservatory of Music, taking piano and vocal lessons, together with tuning, harmony, &c, fulfilling her long cherished desire to learn music. She is five feet, five and one-half inches in height, and probably weighs one hundred thirty pounds. It is a pleasure to think of these two children, trying to do the best they can. Wrote to Calvin and received letters from Mr. Pascoe, Ida and Willie. A foggy morning. (T.S.R. 52. 2 P.M. 67. S.S. 60.)

Nov. 20. Tuesday. A cloudy and showery forenoon. Received a letter from Ada in which she writes that she cannot come today as she expected on account of the very serious illness of someone there who requires their attention. (T.S.R. 51. 2 P.M. 58. S.S. 55.)

Nov. 23. Friday. Have written to Horace and Willie, and received letter from Ida. Their house leaks badly and is literally flooded, and the children are both croupy and they are having a very uncomfortable time waiting for the new house, which is slow in building. (T.S.R. 46. 2 P.M. 57. S.S. 55.)