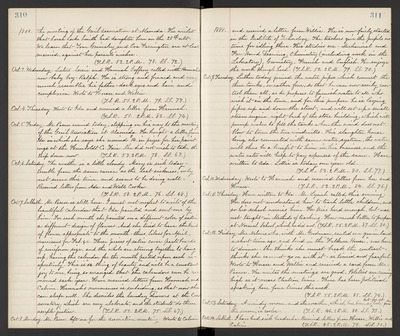 Oct. 3. Wednesday. Sisters Susie and Hannah Geffroy called with Hannah's new baby boy - Ralph. He is strong and forward and very much resembles his father - dark eyes and hair and complexion. Wrote to Horace and Willie. (T.S.R. 51. 2 P.M. 79. S.S. 73.)

Oct. 5. Friday. Mr. Pascoe arrived today, stopping on his way to the meeting of the Gen'l Association at Alameda. He brought a letter from Ida in which she says she received $14 in prizes for her paintings at the Humboldt Co. Fair. She did not wish to take the trip down now. (T.S.R. 53. 2 P.M. 78. S.S. 63.)

Oct. 7. Sabbath. Mr. Pascoe is still here. I must not neglect to write of the beautiful calendar that Ida painted and sent me by him. For each month she painted on a different color of satin, a different design of flowers. And she tried to have the kind of flower appropriate to the month - thus, lilacs for April, marcissus for Feb. &.c. These pieces of satin cover paste boards of uniform size, and the whole are strung together to hang up, having the calendar for the month pasted upon each respectively. This is "a thing of beauty" and will be a constant joy to me, being so arranged that the calendars can be renewed each year. Have received letters from Hannah and Calvin. Hannah's nervousness is subsiding, so that now she can sleep well. She describes the Sunday dinners at the Conservatory, which are very elaborate, and the students do them ample justice. (T.S.R. 52. 2 P.M. 75. S.S. 67.)

Oct. 8. Monday. Mr. Pascoe left us for the Association meeting. Wrote to Calvin

1888. and received a letter from Willie. He is now fairly started in the Institute of Technology. The teachers give the pupils no time for idling there. His studies are - Mechanical and Free-Hand Drawing, Chemistry (including work in the Laboratory), Geometry, French and English. He enjoys the work though hard. (T.S.R. 50. 2 P.M. 79. S.S. 70.)

Oct. 9. Tuesday. Luther today joined the water pipes which connect the three tanks, or rather four, so that he can now easily control them all, as he proposes to furnish water to all who wish it in the town, and for this purpose he is laying pipes up and down the street, and will set up a small steam engine, right back of the store building, which will pump water to fill the tanks when the wired does not blow to turn the two windmills. His slaughter house being also connected with same water system, the water will thus be a benefit to him in his business, and the water rates will help to pay expenses of the same. Have written to Ada. Lottie is today one year old. (T.S.R. 52. 2 P.M. 80. S.S. 77.)

Oct. 11. Thursday. Have written to Ida. Mr. Lynch called this evening. He does not understand how to teach little children, and so his school worries him. He tries hard enough, but was not taught in Methods of teaching. How much better to prepare at Normal School, which he did not. (T.S.R. 55. 2 P.M. 87. S.S. 80.)

Oct. 12. Friday. Mrs. Nelmes, who, with Mr. Goodman, rented our grain land a short time ago, and lived in the "Falkner House", was here to dinner. She thinks she must break the contract - thinks she cannot go on with it - is timid and fearful. Wrote to Horace and Willie and received a card from Mr. Pascoe. He writes the meetings are good. Politics are running high as it nears Election time. There has been political speaking here four times this week. (T.S.R. 55. 2 P.M. 85. S.S. 74.)