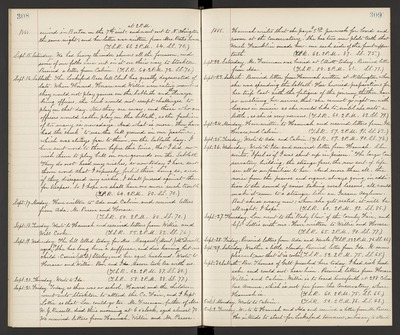 Sept. 16. Sabbath. The Lockeford Base ball Club has greatly degenerated of late. When Howard, Horace and Willie were active members they would not play games on the Sabbath and they always being officers, the club would not accept challenges to play on that day. Now they are away, and those who are officers would rather play on the Sabbath, as the fashion of too many is nowadays. And what is more, they have had the "cheek" to use the ball ground in our pasture, which was always free to them, on the Sabbath day. I have sent word to them before this time, that I did not wish them to play ball on our grounds on the Sabbath. They do not heed my wishes, so now today I have sent them word that I expressly forbid their doing so, and if they disregard my wishes, I shall proceed against them for trespass. So I hope we shall have no more such trouble. (T.S.R. 64. 2 P.M. 80. S.S. 70.)

Sept. 21. Friday. Today as there no school, Howard and the children went into Stockton to attend the Co. Fair, and I kept Lottie so that Lou could go too. Mr. Freeman, father of Mrs. W. J. Russell, died this morning at 6 o'clock, aged almost 70. We received letters from Hannah, Willie and Mr. Pascoe.

Sept. 23. Sabbath. Received letter from Hannah written at N. Abington where she was spending the Sabbath. Her hurried preparations for her trip East with the fatigue of the journey thither, have so unstrung her nerves, that she cannot go right on with lessons in music as she would like to, until she rests a little, as she is very nervous. (T.S.R. 60. 2 P.M. 82. S.S. 79.)

Sept. 26. Wednesday. Wrote to Ida and received letter from Hannah. She writes, "I feel as if I was shut up in prison." The large Conservatory building, the strange faces, the new sort of life, are all so unfamiliar to her. And more than all, the noise from the pianos and organs, always going, in addition to the sound of voices taking vocal lessons, all would make it seem to a stranger like an Insane Asylum. But she is weary now; when she gets rested, it will be all right, I hope. (T.S.R. 60. 2 P.M. 93. S.S. 86.)

Sept 30. Sabbath. Rev. Thomas of Galt preached here today. I had sick headache and could not hear him. Received letters from Horace, Willie, and Calvin. Willie is to board henceforth at 298 Columbus Avenue, which is not far from the Conservatory, where Hannah is. (T.S.R. 60. 2 P.M. 75. S.S. 66.)

Oct. 2. Tuesday. Wrote to Hannah and Ada and received a letter from Mr. Pascoe. He intends to start for Lockeford tomorrow, on his way to attend