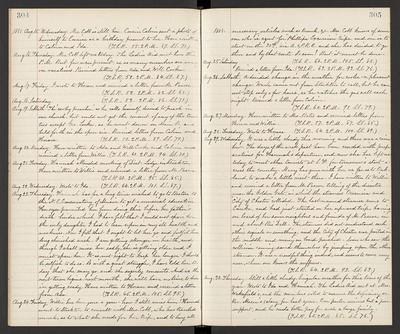 Aug. 19. Sabbath. The "cowboy preacher," as he calls himself desired to preach in our church, but could not get the consent of any of the trustees except Geo. Locke, so he went down on Main St. and held forth in the open air. Received letters from Calvin and Horace. (T.S.R. 50. 2 P.M. 89. S.S. 79.)

Aug. 23. Thursday. Hannah has for a long time wished to go to Boston to the N.E. Conservatory of Music to get a musical education. Her eyes prevented her from doing this before her father's death - besides which I have felt that I could not spare her, the only daughter I had to lean upon in my ill health and weakness. Now I fell that I ought to let her go and fulfil her, long cherished wish. I am getting stronger in health, and though I shall miss her sadly, she is getting older and I must spare her. It is not right to keep her longer. I should be selfish to do so. So with a great struggle, I have told her today that she may go, and she eagerly consents. And as the next turn begins next month, she will have no time to lose in getting ready. Have written to Horace and received a letter from Ada. (T.S.R. 65. 2 P.M. 105. S.S. 95.)

Aug. 24. Friday. Willie has been gone a year how I still miss him! Hannah went to Stockton to consult with Mrs. Cobb, who has traveled much, as to what she needs for her trip, and to buy all.

Aug. 29. Wednesday. It was a little cloudy this morning and there was a rainbow. The days of the week past have been crowded with preparations for Hannah's departure, and now she has left us today to meet other tourists at S. F. for tomorrow's start across the country. Mary has gone with her as far as to Oakland, to make a little visit there. I have written to Willie and received a letter from Mr. Pascoe telling of the disaster near the Golden Gate, in which the steamers "Oceanica and "City of Chester" collided. The last named steamer runs to Eureka, and had just started on her upward trip, having on board of her some neighbors and friends of Mr. Pascoe, in and about Rio Dell. The steamers did not understand each others signals or something, and the City of Chester was ported in the middle and many on board perished. Some who saw the collision coming, saved themselves by jumping upon the other steamer. It was a dreadful thing indeed, and seems to come very near, when one knows the sufferers. (T.S.R. 64. 2 P.M. 93. S.S. 83.)

Aug. 30. Thursday. Still a little cloudy. Singular weather for this time of the year. Wrote to Ida and Hannah. The Ladies Aid met at Mrs. Wakefield's and the members voted to assume the deficiency on Rev. Mason's salary for last year. Our pastor receives but a poor support, and he needs better pay for such a large family. (T.S.R. 65. 2 P.M. 85. S.S. 76.)