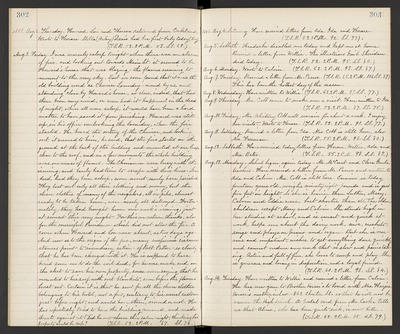 Aug. 3. Friday. I was scarcely asleep tonight when there was an alarm of fire, and looking out towards Main St. it seemed to be Howard's house that was blazing - the flames seeming to mount to the very sky. But we soon found that it was the old building used as Chinese Laundry - owned by us, and standing close by Howard's house, so close, indeed, that had there been any wind, or even had it happened in the dead of night, when all were asleep, it would have been a hard matter to have saved it from perishing. Howard was still up, in his office overlooking the laundry, when the fire started. He heard the outcry of the Chinese, and looking out, it seemed to him, he said, that the fire started on the ground at the back of the building and mounted at one leap clear to the roof, and in a few moments the whole building was one mass of flames. The Chinamen were busy with the ironing, and barely had time to escape with their lives. Indeed, had they been asleep, some must surely have perished. They lost not only all their clothing and money, but the clean clothes of many of the neighbors, all in piles, almost ready to be taken home, were nearly all destroyed. Fortunately, they had brought home our week's ironing, just at sunset this very night. for this we return thanks, also for the merciful Providence which did not allow the fire to come when Howard and Lou were absent, as two days ago. And now as to the origin of the fire, many suspicious circumstances point to incendiary action - of the Robt. Patton - so closely that he has been charged with it. He is supposed to have hired some one to do the evil deed, for he was awake and on the alert to save his own property, some even saying that he mounted to his roof with wet blankets, even before the flames burst out. Certain it is that he sent for all the clean clothes belonging to his hotel, not a few, contrary to his usual custom just before night, and would have them, ironed or not. He has repeatedly tried to have the building removed, and made threats against it. Did he not choose this calm night, thinking his property would be safe? (T.S.R. 52. 2 P.M. 87. S.S. 76.)

Aug 13. Monday. School began again today - Mr. McCourt and Clara Grubs teachers. Have received a letter from Mr. Pascoe and written to Ada and Calvin. Mrs. Cobb is still here. Eunice is today fourteen years old, weighs ninetyeight pounds and is just five feet in height. So she is heavier than Luther, Mary, Calvin and Eddie were, but shorter than all the older children except Mary and Calvin. She stands high in her studies at school, and is smart and quick at work, helps me about the dairy work, sews, crochets, sings and plays on piano and organ. But she is nervous and impatient, wishes to get everything done quickly and cannot endure any work that is slow and pains taking. Active and full of fun, she loves to romp and play. She is generous and loving in disposition, and a loyal friend. (T.S.R. 60. 2 P.M. 98. S.S. 84.)