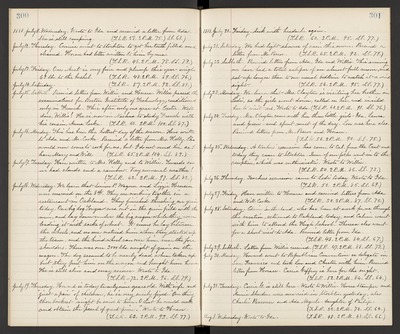 July 15. Sabbath. Received letters from Willie and Horace. Willie passed the examinations for Boston Institute of Technology, conditioned only in French. This after only one year at Exeter. Well done, Willie! He is now in Nashua to study French with his cousin, Anna Locke. (T.S.R. 60. 2 P.M. 100. S.S. 87.)

July 18. Wednesday. We learn that Simon P. Wagner and Lizzie Hansen were married on the 8th. They are working together in a restaurant in Oakland. They finished threshing our grain today. Our big dog Towzer was out in the grain field with the men, and lay down under the big wagon while they were loading it with sacks of wheat. It seems he lay between the wheels, and no one noticed him when they started up the team, and the kind wheel ran over him near the fore shoulders. There was over 3000 lbs. weight of grain on the wagon. The dog seemed to be nearly dead when taken up but they put him on the wagon and brought him home. He is still alive and may recover. Wrote to Ida. (T.S.R. 72. 2 P.M. 96. S.S. 79.)

July 28. Saturday. Edwin Sutherland, who has been at work for us through the vacation, returned to Oakland today, and Calvin went with him to attend the High School. Theresa also went for a short visit to Ada. Received letter from Ida. (T.S.R. 48. 2 P.M. 84. S.S. 67.)

July 30. Monday. Howard went to Republican Convention as delegate in San Francisco and took Lou and Chester with him. Received letter from Horace. Carrie Geffroy is here for the night. (T.S.R. 52. 2 P.M. 84. S.S. 64.)