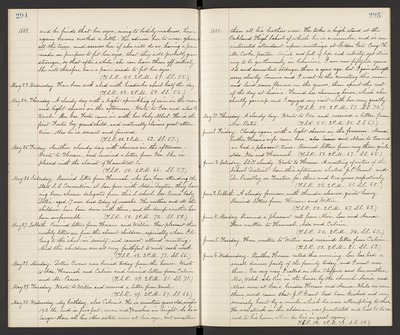 1888. and he friends that her eyes, owing to bodily weakness, have again become crooked a little. He advises her to wear glasses all the time, and assures her if she will do so, having a pair made on purpose to fit her eyes, that they will probably grow stronger, so that after a while, she can leave them off entirely. She will therefore have a pair made to fit her eyes. (T.S.R. 40. 2 P.M. 69. S.S. 55.)

May 24. Thursday. A cloudy day with a light sprinkling of rain in the morn and light showers in the afternoon. Wrote to Ida and also to Uncle. Mrs Geo. Foster come in with her baby Albert. He is the first Foster boy Grand child, and naturally claims great attention. Also he is smart and forward. (T.S.R. 40. 2 P.M. 63. S.S. 57.)

May 26 Saturday. Received letter from Hannah, who has been attending the State S.S. Convention at San Jose with Addie Dayton, they having been chosen delegates from this S. school. Geo. Owens' baby Dollie- aged 17 mos. died today of measles. The mother and all the children have been down with them, and the damp weather has been unfavorable. (T.S.R. 50. 2 P.M. 72. S.S. 59.)

May 27. Sabbath. Received letters from Horace and Willie. How pleasant these weekly letters are from the absent children, especially when I belong to the "shut-in" society, and cannot attend meeting. And the children are all very faithful to write each week. (T.S.R. 42. 2 P.M. 77. S.S. 66.)

May 30. Wednesday. My birthday, also Calvin's. He is nineteen years old, weighs 142 lbs, and is five feet, seven and 2/3 inches in height. So he is larger than all his older sisters were at his age, but smaller

1888. than all his brothers were. He takes a high stand at the Oakland High School of which he is a member, and is an interested attendant upon meetings at Golden Gate Cong. Ch. Mr. Cooke, pastor. Boyish and full of life and activity, yet striving to be gentlemanly in behavior. I am now fiftytwo years old and somewhat stronger than a year ago, but I gain strength very slowly. Eunice and I went to the cemetery this morn and laid some flowers on the graves, then spent the rest of the day at Susie's. Found her cleaning house, which she shortly gave up, and I enjoyed my visit with her very greatly. (T.S.R. 50. 2 P.M 87. S.S. 70.)

June 2. Saturday. Still cloudy. Wrote to Horace. A meeting of voters of the School District have this afternoon elected J.P. Grant and Dr. Priestley as Trustees, for three and two years respectively. (T.S.R. 58. 2 P.M. 81. S.S 65.)

June 6. Wednesday. Brother Horace called this morning. Lou has had a small dinner party of the family today, and I went over there. On my way I called on Mrs. Clifford and her mother, Mrs. Welch, who live in the house by the church. Susie and Alice were at Lou's, besides Horace and Anna. While we were there word came that J.P. Grant had been kicked and very seriously hurt by a mule, which he was attempting to shoe. He was struck in the abdomen, was frustrated and had to be carried to his home, where he his in great agony. (T.S.R. 50. 2 P.M. 77. S.S 59.)