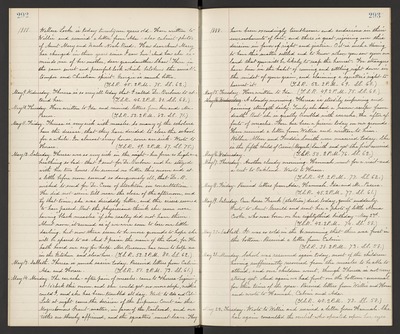 1888. Wallace Locke is today twentyone years old. Have written to Willie and received a letter from Ada - also cabinet photos of Aunt Mary and Uncle Noah Reed. How dear Aunt Mary has changed in these year since I saw her! And how she reminds me of her mother, dear grandmother Shaw! There is the same sweet and peaceful look which betokens the amiable temper and Christian spirit. Georgie is much better. (T.S.R. 45. 2 P.M. 75. S.S. 62.)

May 12. Saturday. Theresa was so very sick in the night - her fever so high and breathing so bad - that I sent for Dr. Barbour and he stayed with her two hours. She seemed no better this morn and at a little before noon seemed so dangerously ill, that Dr. B. wished to send for Dr. Cross of Stockton in consultation. He did not arrive till near the close of the afternoon, and by that time, she was decidedly better, and the crisis seemed to have passed. But the physicians think she came near having "black measles" if she really did not have them. About noon, it seemed as if we were soon to lose our little darling, but now there seem to be more grounds to hope she will be spared to us. And I praise the name of the Lord, for He hath heard our cry for help. Mrs. Russem has come to help us in the kitchen and elsewhere. (T.S.R. 52. 2 P.M. 80. S.S. 62.)

May 14. Monday. The earache - after pain of measles - came to Theresa - beginning at 1 o'clock this morn. and she could get no more sleep, neither could I, and she has been troubled all day. Wrote to Ada and Calvin. Late at night came the decision of the Supreme court in the Moquelomous Grant matter, in favor of the Railroad, and our titles are thereby affirmed, and the "squatters" must leave. They

1888. have been exceedingly troublesome and andacious in their encroachments of late, and there is great rejoicing over this decision in favor of right and justice. O it is such a blessing to have this matter settled and to know when you sow our own land that you will be likely to reap the harvest. For strangers have been in the habit of coming and settling right down in the midst of your grain, and claiming a "squatter's" right to harvest it. (T.S.R. 52. 2 P.M. 69. S.S. 60.)

May 15. Tuesday. Have written to Ida. (T.S.R. 49. 2 P.M. 75. S.S. 60.) A cloudy morning. Theresa is steadily improving and gaining strength daily. Truly she had a narrow escape from death. But she is greatly troubled with earache, the after effects of measles. There has been a picnic today on our grounds. Have received a letter from Willie and written to him. Wilbur Allen and Freddie Smith were married today. She is the fifth child of Carrie (Megerle/Smith and yet the first married.

May 21. Monday. School was resumed again today, most of the children having sufficiently recovered from the measles to be able to attend, and our children went, though Theresa is not very strong yet. And again we had frost on the bottom - unusual for this time of the year. Received letters from Willie and Horace and wrote to Hannah, Calvin and Ada. (T.S.R. 40. 2 P.M. 73. S.S. 58.)

May 22.Tuesday. Wrote to Willie and received a letter from Hannah She has again consulted the oculist who operated upon her eyes