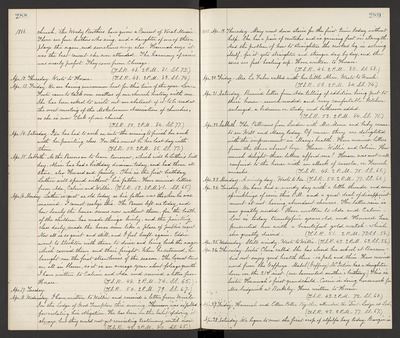 1888. church, the Woody Brothers have given a Concert of Vocal Music. There are four brothers who sing, and a daughter of one of them plays the organ, and sometimes sings also. Hannah says it was the best concert she ever attended. The harmony of voices was nearly perfect. They came from Chicago. (T.S.R. 48. 2 P.M. 81. S.S. 73.)

Apr. 13. Friday. We are having uncommon heat for this time of the year. Laura Foote came to talk over matters of our church history with me. She has been asked to write out an abstract of it to be read at the next meeting of the Mokelumne Association of churches, as she is now Clerk of our church. (T.S.R. 50. 2 P.M. 84. S.S. 77.)

Apr. 15. Sabbath. As the Pascoes are to leave tomorrow, which will be Luther's birthday, Alice has had a birthday dinner today, and had them all there, also Howard and family. This is the first birthday Luther will spend without his father. Have received letters from Ada, Calvin and Willie. (T.S.R. 52. 2 P.M. 81. S.S. 65.)

Apr. 16. Monday. Luther is just as old today as his father was when he was married. I cannot realize this. The Pascoes left us today, and how lonely the house seems now without them, for the bustle of the children has made things lively, and the painting class daily, made the house seem like a place of public resort. Now all is so quiet and still, and I feel bereft again. Eddie went to Stockton with them to drive and bring back the wagon which carried them and their freight. When he returned, he brought me the first strawberries of the season. The locust trees are all in bloom, so it is an average year about foliage growth. I have written to Calvin and Ada and received a letter from Horace. (T.S.R. 48. 2 P.M. 74. S.S. 65.)

Apr. 18. Wednesday. I have written to Willie and received a letter from Uncle. In the Lodge of Good Templars this evening, Thomson was expelled for violating his obligation. He has been in the habit of doing it always. but they could not get convicting testimony until now. (T.S.R. 48. 2 P.M. 80. S.S. 65.)

1888. Apr. 19. Thursday. Mary went down stairs for the first time today without help. She has a pair of crutches and is gaining fast in strength. And the problem of how to straighten the crooked leg is solving itself, for it gets straighten and stronger day by day, and the sores are fast healing up. Have written to Horace. (T.S.R. 46. 2 P.M. 80. S.S. 68.)

Apr. 22. Sabbath. The Patterson from Linden with Mrs. Moore and baby came to see Will and Mary today. Of course they are delighted with the improvement in Mary's health. Have received letters from the three absent boys. Horace, Willie and Calvin. How much delight these letters afford me! Horace was not well, confined to the house with an attack of roseola, or French measles. (T.S.R. 48. 2 P.M. 75. S.S. 65.)

Apr. 24. Tuesday. We have had a windy day with a little thunder and some sprinklings of rain this P.M. and a great deal of disappointment at not having abundant showers. The "latter rain" is now greatly needed. Have written to Ada and Calvin. Lou is today twentyfive years old and Howard has presented her with a beautiful gold watch - which she greatly desired. (T.S.R. 51. 2 P.M. 73. S.S. 58.)

Apr. 26. Thursday. Sister Clara called. She has closed her school at Burson - did not enjoy good health there - is pale and thin. Have received word from the Geffroys. Mabel (Geffroy) McIntire has a daughter born on the 21st inst. (our lamented mother's birthday.) This is Sister Hannah's first grandchild. Carrie is doing housework for Mrs. Sedgwick at Berkeley. Have written to Horace. (T.S.R. 43. 2 P.M. 72. S.S. 60.)

Apr. 28. Saturday. We began to mow the first crop of alfalfa hay today. Georgie is