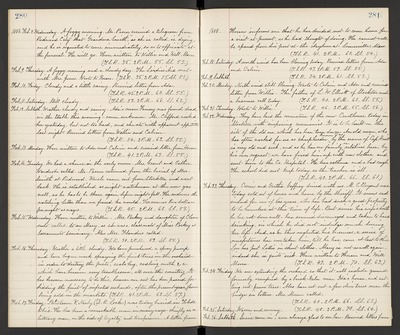 Feb. 12. Sabbath. Weather cloudy and rainy. Ada's man Fanny was found dead in the Stable this morning - cause unknown. Mr. Clifford worked her yesterday, but not too hard, and she ate with apparent appetite last night. Received letters from Willie and Calvin. (T.S.R. 54. 2 P.M. 63. S.S. 55.)

Feb. 14. Tuesday. We had a shower in the early morn. Mrs. Grant and Esther Wardrobe called. Mr. Pascoe returned from the burial of Mrs. Smith at Redwood. Uncle came out from Stockton and went back. He is established as night watchman at the new gas well, so he has to be there again before night-fall. He endures the watching better than we feared he would. He recieved two dolalrs per night as wages. (T.S.R. 45. 2 P.M. 60. S.S. 53.)

Feb. 16. Thursday. Weather a little cloudy. We have purchased a spray pump and have begun work spraying the fruit trees in the orchard, in order to destroy the pests, scale bug, codling moth, &.c. which have become very troublesome, all over the country. It has become necessary to do this, because an act has been passed forbidding the fruit of infested orchards, after the present year, from being sold in the markets. (T.S.R. 41. 2 P.M. 62. S.S. 57.)

Feb. 17. Friday. Petroleum V. Nasby (D. R. Locke) was today buried in Toledo, Ohio. He has been a remarkable mare in many ways-chiefly as a literary man, on the side of loyalty and temperance. A letter from

Feb. 22. Wednesday. They have laid the cornerstone of the new Courthouse today in Stockton with imposing ceremonies. It is to be built on the site of the old one, which has been torn down. An old man, who has often worked for us as sheepherder, known to us by the name of "Cap. Hunt" is very old and sick, and as he has no family or relatives here, by his own request, we have fixed him up with new clothes and sent him to the Co. Hospital. He has asthma and a bad cough. The school did not keep today, as the teacher is ill. (T.S.R 42. 2 P.M. 66. S.S. 61.)

Feb. 23. Thursday. Carrie and Bertha Geffroy dined with us. M. E. Bryant was today sold out of house and home by the Sheriff. It seems sad indeed for one of his years, who has had such a good property, to be homeless at this time of life. But since his wife's death he has not done well - has seemed discouraged and taken to hard drinking, in which he did not indulge much during her life. And, as he thus neglected his business, a series of misfortunes has over taken him, till he has come at last to this. Lou has put Lottie in short clothes. Mary is not so well again, indeed she is quite sick. Have written to Horace and Will Moore. (T.S.R 43. 2 P.M. 70. S.S. 63.)

Feb. 24. Friday. We are extending the orchard so that it will include ground formerly occupied by a brick-kiln near Ida's house, and setting out prune trees. Also have set out a few olive trees near the bridge in bottom. Mrs. Mason called. (T.S.R 40. 2 P.M. 66. S.S. 63.)

Feb. 26. Sabbath. Susie came in - am always glad to see her. Recieved letters from