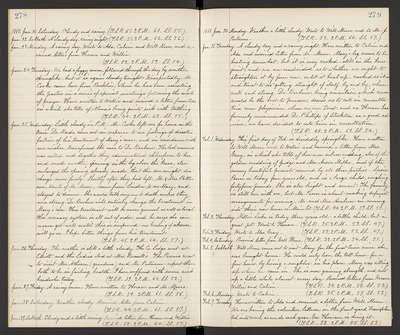 Jan. 24. Tuesday. We had a foggy morn, followed through the day by weather springlike, but it is again cloudy tonight. Unexpectedly, Mr. Cooke came here from Rocklin, where he has been assisting the pastor in a series of special meetings following the week of prayer. Have written to Willie and received a letter from Ada in which she tells of Alma's being quite sick with teething. (T.S.R. 44. 2 P.M. 63. S.S. 55.)

Jan. 25. Wednesday. Little cloudy in P.M. - Mr. Cooke left us for home on the train. Dr. Beede came out in response to our feelings of dissatisfaction of his treatment of Mary's case, and in accordance with our wishes, transferred the case to Dr. Barbour. The last named was called, and together they administered chloroform to her and made another opening in the leg above the knee, also enlarge the opening already made, that the sore might discharge more freely. Shortly after they had left, Mr. & Mrs. Patterson, Uncle of Mr. Moore, came from Linden to see Mary, and stayed to dinner. She would talk anyone to death, unless they were strong. Dr. Barbour will entirely change the treatment in Mary's case. His treatment will be more general as well as local. Her urinary system is all out of order, and he says she can never get well until this is improved - no healing of abscess will go on. I hope better things from his treatment. (T.S.R. 45. 2 P.M. 64. S.S. 57.)

Jan. 31. Tuesday. A cloudy day and a rainy night. Have written to Calvin and Ada and received letter from Mr. Moore. Mary's leg seems to be healing somewhat, but it is very crooked - still in the knee-joint, - and we are undecided as to whether we ought to straighten it by force now, or let it heal up, crooked as it is and trust to its getting straight of itself by and by, when well and strong. Dr. Barbour, being uncertain which course would be the best to pursue, desires us to call in consultation some physician whom we can trust, and as Horace has formerly recommended Dr. Phillips of Stockton as a good adviser, we have decided to call him in consultation. (T.S.R. 48. 2 P.M. 62. S.S. 54.)

Feb. 1. Wednesday. This first day of Feb. is decidedly springlike. Have written to Will Moore and to Willie and received a letter from Mrs. Gray, in which she tells of her own silver wedding, also of the golden wedding of Judge and Mrs. Anson Miller, and of the many beautiful presents received by all these parties. Susie Pascoe is today four years old, and is a large child, weighing fortyfour pounds. She is also bright and smart. The family is still here with us, but Mr. Pascoe is about making definite arrangements for moving. Mr. And Mrs. Ambrose are moving into their new house on Main St. (T.S.R. 44. 2 P.M. 59. S.S. 50.)

Feb. 5. Sabbath. Will Moore came out to visit Mary for the first time since she was brought home. He could only leave the toll-house for a few hours, by hiring a neighbor in his place. Mary was sitting up when he came in. She is now gaining strength, and sits up a little while almost every day. Received letters from Horace Willie and Calvin. (T.S.R. 34. 2 P.M. 58. S.S. 53.)