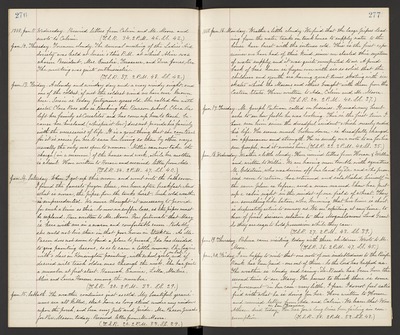 Jan. 13. Friday. A cloudy and windy day and a very windy night, and one of the coldest, if not the coldest wind we have ever known here. Susie is today fortynine years old. She called here with sister Clara Ross who is teaching the Burson School. Clara has left her family at Corralitos and has come up here to teach, because her husband (whisper it low) does not provide his family with the necessaries of life. It is a good thing that she can teach for it is easier for her to earn her living so than by other ways usually the only ones open to women. Nettie can now take the charge (in a manner) of the house and work, while her mother is absent. Have written to Horace and received letter from Ada. (T.S.R. 34. 2 P.M. 47. S.S. 40.)

Jan. 14. Saturday. When I got up this morn and went into the bathroom I found the faucets frozen there, one hour after breakfast. And what is worse, the pipes form the tanks burst. Such cold weather is unprecedented. We never thought it necessary to provide for such a time as this. So now we suffer loss, as the pipes must be replaced. have written to Mr. Moore. How fortunate that Mary is here with me in a warm and comfortable room. Probably she could not live there in that poor house in Stockton. As Mr. Pascoe does not seem to find a place to preach, Ida has decided to give painting lessons, so as to earn a little money. She begins with a class in Kensington painting, with school girls on Sat. and if desired will teach older ones through the week. She has quite a number of first start. Hannah, Eunice, Lilla, Mertice, Alice and Laura Hansen among the number. (T.S.R. 20. 2 P.M. 33. S.S. 29.)

Jan. 15. Sabbath. The weather continues just as cold. My beautiful geraniums are all killed, that have so long stood under my windows upon the porch, and been my pets and pride. Mr. Pascoe preached for Rev. Mason today. Received letter from Mr. Moore. (T.S.R. 20. 2 P.M. 33. S.S. 29.)

1888. Jan. 16. Monday. Weather a little cloudy - We find that the large pipes leading from the water tanks on tank house to supply water to the house have burst with the intense cold. This is the first experience we have had of this kind, since we started this system of water supply, and it was quite unexpected to us. A pond back of Geo's house is frozen over with ice so solid that the children and youth are having great times skating with ice skates which the Masons and others brought with them from the Eastern States. Have written to Ada, Calvin and Mr. Moore. (T.S.R. 24. 2 P.M. 40. S.S. 37.)

Jan. 17. Tuesday. Mr. Joseph Putnam called on business. It made my heart ache to see how feeble he was looking. This is the first time I have seen him since the dreadful accident which nearly ended his life. He seems much broken down - is dreadfully changed in appearance and strength. He is surety on a note to us for his son Joseph, and it worries him. (T.S.R. 23. 2 P.M. 40. S.S. 35.)

Jan. 18. Wednesday. Weather a little cloudy. Have received letters from Horace & Willie and written to Willie. We are having more trouble with squatters. Mr. Goldstein, who was driven off our land by Dr. and who promised never to return, has returned and established himself in the same place as before, and a man named Shaw has put up a cabin right in the midst of our field of wheat. They are something like Satan, who, knowing that his time is short, is desperately active to annoy us. We are expecting, at anytime, to hear of final decision relative to this Moquelomous Land Grant. So they are eager to hold possession while they can. (T.S.R. 27. 2 P.M. 43. S.S. 39.)

Jan. 20. Friday. I am happy to write that one note of our indebtedness to the Pacific Bank has been paid - one out of three. So the Lord has helped us. The weather is cloudy and rainy. Dr. Beede has been here the second time to see Mary. He seems to think there is some improvement in her case - very little, I fear. I do not feel satisfied with what he is doing for her. Have written to Horace and received letters from Ada and Calvin. We learn that Wm. Athearn died today in San Francisco. He has for a long time been failing in consumption. (T.S.R. 38. 2 P.M. 53. S.S. 48.)