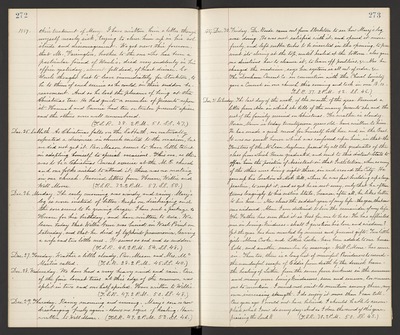 1887. their treatment of Mary. I have written him a letter though myself nearly sick, trying to cheer him up in his solitude and discouragement. We got news this forenoon, that Mr. Farrington, brother to the one who has been a particular friend of Uncle's, died very suddenly in his office yesterday, almost fell dead, of heart disease. So Uncle thought best to leave immediately for Stockton, to be to them of such service as he could in their sudden bereavement. And so he lost the pleasure of being at the Christmas tree. He had quite a number of presents upon it. Hannah and Eunice had ten or twelve presents apiece and the others were well remembered. (T.S.R. 28. 2 P.M. 51. S.S. 47.)

Dec. 25. Sabbath. As Christmas falls on the Sabbath, we naturally expected a discourse in church suited to the occasion, but we did not get it. Rev. Mason seems to have little talent in adapting himself to special occasions. This eve, as there was to be a Christmas Concert exercise at the M.E. church and our folks wished to attend it, there was no meeting in our church. Received letters from Horace, Willie and Will Moore. (T.S.R. 32. 2 P.M. 57. S.S. 50.)

Dec. 26. Monday. The early morning was windy and rainy. Mary's leg is worse instead of better - keeps on discharging and the sore seems to be growing larger. I have sent a package to Horace for his birthday, and have written to Ada. We learn today that Willie Geeve was buried in West Point on Saturday, and that he died of typhoid pneumonia, leaving a wife and two little ones. It seems so sad and so sudden. (T.S.R. 40. 2 P.M. 54. S.S. 48.)

1887. Dec. 30. Friday. Dr. Beede came out from Stockton to see how Mary's leg was doing. He was not satisfied with it, and opened it more freely, and left rubber tubes to be inserted in the opening, to prevent its closing at the top, until healed at the bottom - also gave me directions how to cleanse it, to leave off poultices, &.c. Also he changed the medicine, says her system is all out of order, &.c The Denham Concert Co. in connection with the Choral Society gave a Concert in our church this evening and took in over $18.00. (T.S.R. 37. 2 P.M. 52. S.S. 46.)

Dec. 31. Saturday. The last day of the week, of the month of the year. Received a letter from Ada in which she tells of the many presents she and the rest of the family received on Christmas. The weather is cloudy. Horace Mann is today twentyseven years old - have written to him. He has made a good record for himself both here and in the East. It was no small honor which was conferred upon him, in that the Trustees of the McLean Asylum passed by all the graduates of the class from which Horace graduated, and sent to this distant State to offer him the position of Assistant in that Institution, when so many of the others were living right there, in and around the City. He gave up his location at Mok. Hill, where he was fast building up a large practice, to accept it, and as yet he is not sorry, only that he often turns longingly to his native State, because, after all, he likes better to live here. - Now closes the saddest year of my life - the year that saw me widowed. Alone I am destined to live the remainder of my life. The Father has seen that it is best for me to be so. He has afflicted me in loving-kindness - shall I question his love and wisdom? Yet the year has been marked by mercies and precious gifts. Two little girls - Alma Cooke and Lottie Locke - have been added to our household, and another member by marriage - Will P. Moore - has come in. Then too, there is a long list of merciful Providence to record - the wonderful escape of Eddie from death by the derrick beam - the healing of Luther from the severe fever sickness in the summer - and many more loving kindnesses, seen and unseen, too numerous to mention. I must not omit to mention among these, my own increasing strength. I do enjoy it more than I can tell. One year ago I would not have believed I should be able to accomplish what I now do every day. And so I close the record of this year, praising the Lord!! (T.S.R. 30. 2 P.M. 50. S.S. 45.)