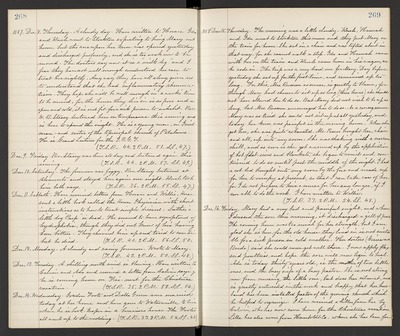 1887. Dec. 8. Thursday. A cloudy day. Have written to Horace. Ida and Uncle went to Stockton expecting to bring Mary out home, but the sore upon her knee was opened yesterday and discharged profusely, and she is too weak now to be moved. The doctors say now it is a "milk leg" and I fear they have not well enough understood her case to treat her rightly. Any way they have all along given us to understand that she had inflammatory rheumatism. They hope she will be well enough in a week's time to be moved, for the house they live in is so poor and so open and old, it is not fit for a sick person to inhabit. Rev. W.B. Stacey lectured here on temperance this evening and is here to spend the nights. He is a young man, an Irishman - and rector of the Episcopal church of Petaluma. he is Grand Lecturer for the I.O.G.T. (T.S.R. 44. 2 P.M. 51. S.S. 47.)

Dec. 11. Sabbath. Have received letters from Horace and Willie. Horace sent a little book called the Home Physician with short instructions as to how to treat simple diseases. Luther's little dog "Purp" is dead. He seemed to have symptoms of hydrophobia, though they did not know of his having been bitten They chained him up and tried to cure him but he died. (T.S.R. 40. 2 P.M. 56. S.S. 50.)

1887. Dec. 15. Thursday. The morning was a little cloudy. Uncle, Hannah and Ida went to Stockton this morn and they put Mary on the train for home. She sat in a chair and was lifted about in that way, for she cannot walk a step. Ida and Hannah came with her on the train and Uncle came home in his wagon, as he rode in. The trip was a very hard one for Mary. Day before yesterday she sat up for the first time, and remained up too long. For this, Mrs. Russem as nurse, is greatly to blame, for though Mary had chosen to sit up so long (three hours) she should not have allowed her to do so. But Mary did not wish to be up so long, but Mrs. Russem encouraged her to do so. As a consequence Mary was so tired she could not sit up at all yesterday, and today her knee was painful in the moving home. When she got here, she was quite exhausted. Mr. Pascoe brought her, chair and all, up into my room. She was shaking with a nervous chill, and as soon as she got warmed up by the application of hot flat-irons and blankets, she began to vomit and continued to do so until past the middle of the night. I had a cot-bed brought into my room by the fire and made up for her to occupy at present, so that I can take care of her for I do not propose to hire a nurse for her any longer, if I am able to do the work. I have written to Willie. (T.S.R. 37. 2 P.M. 54. S.S. 48.)

Dec. 16. Friday. Mary had a very bad and painful night, and when I dressed the sore this morning, it discharged a gill of pus. The coming home was too much for her strength, but I am glad she is here, for the old house they lived in is not suitable for a sick person in cold weather. Her doctors (Giesea and Beede) said she could never get well there. I now apply flaxseed poultices, and hope the sore will now begin to heal. Ada is today thirty years old, is the mother of two little ones, and the busy wife of a busy pastor. She is not strong now from nursing the little one, but does her utmost, and is greatly interested in the work and happy that her husband has been installed pastor of the growing church which he helped to organize. I have received a letter from her by Calvin, who has now come home for the Christmas vacation. Lilla has also come from Humboldt Co. where she has been for