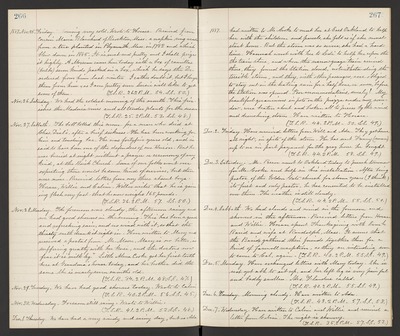 1887. Nov. 25. Friday. Morning very cold. Wrote to Horace. Received from Cousin Maria Blanchard of Brockton, Mass. a napkin ring made from a tree planted in Plymouth, Mass. in 1783 and which blew down in 1885. It is neat and pretty and I shall prize it highly. A Mexican came here today with a box of camillas (bulbs) seven kinds packed in a box, which he says the Dr. ordered from him last winter I rather doubt it, but I bought them from him, as I am pretty sure Susie will like to get some of them. (T.S.R. 26. 2 P.M. 54. S.S. 50.)

Nov.27.Sabbath. The bell tolled this morn. for a man who died at Chas. Dial's, after a brief sickness. He has been working for him and tending bar. He was fortyfive years old, and is said to have been one of the defenders of our Union. But he was buried at night without a prayer or ceremony of any kind, at the Brick Church. Some of our folks went over expecting there would be some kind of services, but there were none. Received letters from my three absent boys. Horace, Willie and Calvin. Willie writes that he is gaining flesh very fast - that he now weighs 165 pounds. (T.S.R. 26. 2 P.M. 57. S.S. 50.)

Nov. 28. Monday. The forenoon was cloudy, the afternoon rainy and we had good showers in the evening. This has been a good and refreshing rain, and no wind with it, so that the thirsty earth drank it right in. Have written to Mary and received a postal from Mr. Moore. Mary is no better, is suffering greatly with her knee, and the doctors now fear it is "milk leg." Little Alma Cooke got her first tooth here at Grandma's house today, and her brother did the same. She is nearly seven months old. (T.S.R. 34. 2 P.M. 48. S.S. 47.)

Dec. 1. Thursday. We have had a very windy and rainy day, but as Ada

1887. had written to Mr. Cooke to meet her at East Oakland to help her with the children and parcels, she felt as if she must start home. But the storm was so severe, she had a hard time. Hannah went with her to Lodi to help her upon the the train there, and when the narrow-guage train arrived there, they found the Station closed, notwithstanding the terrible storm, and they, with other passengers, were obliged to stay out in the beating rain for a half hour or more, before the Station was opened. Poor accommodations, surely! My beautiful geraniums in pots on the piazza under my window, were beaten about and broken all to pieces by the wind and drenching storm. Have written to Horace. (T.S.R. 44. 2 P.M. 50. S.S. 49.)

Dec. 3. Saturday. Mr. Pascoe went to Oakland today to preach tomorrow for Mr. Cooke and help in his installation. After being pastor of the Golden Gate church for eleven years (I think) its first and only pastor, he has consented to be installed over them. The weather is still cloudy. (T.S.R. 44. 2 P.M. 55. S.S. 50.)

Dec.4.Sabbath. We had clouds and wind in the forenoon and showers in the afternoon. Received letters from Horace and Willie. Horace spent Thanksgiving with Sam & Baird and wife at Randolph, Mass. It seems that the Bairds gathered their friends together then for a kind of farewell reception, as they are intending soon to come to Cal. again. (T.S.R. 40. 2 P.M. 55. S.S. 49.)