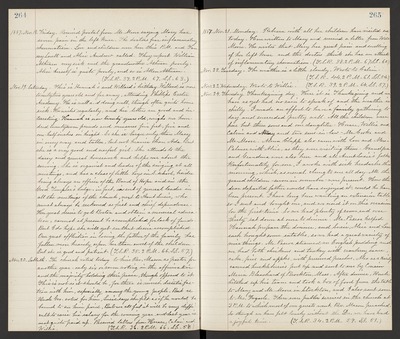 1887. Nov. 18. Friday. Received postal from Mr. Moore saying Mary has severe pain in the left knee. The doctors fear inflammatory rheumatism. Lou and children were here this P.M. and Fanny Swett and Alice Andrew called. They report William Althearn very sick and the grandmother Althearn poorly. Alice herself is quite poorly, and so is Allen Althearn. (T.S.R. 37. 2 P.M. 67. S.S. 63.)

Nov. 19. Saturday. This is Hannah's and Willard's birthday. Willard is now twentytwo years old and far away, attending Phillips Exeter Academy. He is well and doing well, though often quite homesick. He writes regularly, and his letters are good and interesting. Hannah is now twenty years old, weighs one hundred twentyseven pounds and measures five feet, five and one-half inches in height. So she is larger only than Mary in every way and taller, but not heavier than Ada. But she is a very good and useful girl. She attends to the dairy and general housework and helps me about the sewing. She is organist and leader of the singing at all meetings, and has a class of little boys in S. school, besides being always are officer of the Band of Hope and in the Good Templar's Lodge- in fact, in sort of general leader in all the meetings of the church, next to Aunt Susie, who must always be reckoned as first and chief dependence. Her great desire to go to Boston and obtain a musical education, cannot at present be accomplished for lack of funds. But I do hope she will yet see that desire accomplished. Our great affliction in losing the father of the family has fallen more heavily upon her than most of the children but she is good and patient. (T.S.R. 35. 2 P.M. 66. S.S. 57.)

Nov. 20. Sabbath. The church voted today to hire Rev. Mason as pastor for another year - only six or seven voting in the affirmation and the majority holding their peace, though opposed to it. This is not as it should be, for there is much dissatisfaction with him, especially among the young people. But as Uncle Geo. voted for him, Susie says she felt as if he would be bound to see him paid. But we all feel it will be very difficult to raise his salary for the coming year, and last year is not quiet paid up. Received letters from Horace, Calvin, and Willie. (T.S.R. 36. 2 P.M. 66. S.S. 58.)

1887. Nov. 21. Monday. Rebecca with all her children have visited us today. have written to Mary and received a letter from Will Moore. He writes that Mary has great pain and swelling of her left knee and the doctors think she has an attack of inflammatory rheumatism. (T.S.R. 38. 2 P.M. 67. S.S. 60.)

Nov. 24. Thursday. Thanksgiving day. Here it is Thanksgiving and we have as yet had no rain to speak of and the weather is chilly. I made an effort to have a family gathering today and succeeded pretty well. All the children were here but three sons and one daughter - Horace, Willie and Calvin and Mary and two sons-in-law - Mr. Cooke and Mr. Moore. Alma Clapp also came with Lou and Mrs. Palmer with Alice, as they were visiting them. Grandpa and Grandma were also here and all Aunt Susie's folks. Unfortunately for me, I awoke with sick headache this morning, which, as usual clung to me all day. All the grandchildren - seven in number - were present. How the dear departed father would have enjoyed it, could he have been present. I have long been wanting an extension table so I sent and bought one, and we used it on this occasion for the first time. So we had plenty of room, and over thirty sat down at once to dinner. Mr. Pascoe helped Hannah prepare the dinner, and Susie, Alice and Lou each brought some eatables, so we had a great variety of nice things. Mr. Pascoe steamed an English pudding and we had both chickens and turkey with cranberry sauce, cake, pies and apples, with preserved peaches. Also as a [?] canned huckleberries put up and sent to me by Cousin Maria Blanchard of Brockton, Mass. After dinner, Uncle hitched up his team and took a box of food from the table to Mary and Mr. Moore in Stockton, and I also sent some to Mrs. Fogarle. There were public services in the church at 3 P.M. to which most of our guests went. Rev. Mason preached. So though we have felt lonely without the Dr. we have had a joyful time. (T.S.R. 34. 2 P.M. 59. S.S. 51.)