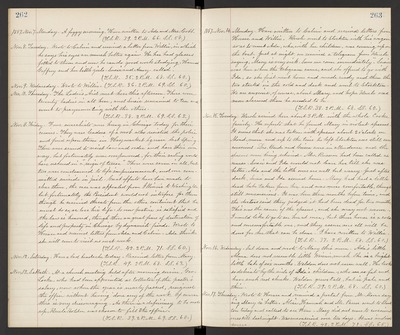 Nov. 8. Tuesday. Wrote to Calvin and received a letter from Willie, in which he says his eyes are much better again. He has had glasses fitted to them and now he can do good work studying. Hannah Geffroy and her little girls- Susie and Amy - called. (T.S.R. 35. 2 P.M. 68. S.S. 60.)

Nov. 11. Friday. Four anarchists were hung in Chicago today for their crimes. They were leaders of a mob who resisted the police and fired upon them in Haymarket Square last Spring. There were armed to resist law and order and have their own way, but fortunately was overpowered, for their ruling would have ushered in a "reign of terror" There were seven in all, but two were condemned to life imprisonment, and one committed suicide in jail. Great efforts have been made to clear them, the case was appealed from Illinois to Washington but, fortunately the President would not interfere for them though he received threats from the other continent that he must do so, or lose his life. So now Justice is satisfied and the law is honored, though there are great fears of destruction of life and property in Chicago by dynamite friends. Wrote to Horace and received letters from Ada and Calvin. Ada thinks she will come to visit us next week. (T.S.R. 42. 2 P.M. 71. S.S. 60.)

Nov. 13. Sabbath. At a church meeting held after morning service, Geo. Locke, who had been appointed as Collector of the pastor's salary, now when the year is nearly passed, resigned the office without having done any of the work. of course this is very discouraging. As there is a deficiency to be made up, Uncle Holden was chosen to fill the office. (T.S.R. 39. 2 P.M. 69. S.S. 60.)

1887. Nov. 14. Monday. Have written to Calvin and received letters from Horace and Willie. Uncle went to Stockton with his wagon so as to meet Ada, who, with her children, was coming up on the boat. Just at night, we received a telegram from Uncle saying, "Mary is very sick. Someone come immediately". Susie was here when the telegram came, and she offered to go with Ida, so she first went home and made ready and then the two started in the cold and dark and went to Stockton. We are anxious, of course, about Mary, and hope Uncle was more alarmed than he needed to be. (T.S.R. 38. 2 P.M. 68. S.S. 60.)

Nov. 15. Tuesday. Uncle arrived here about 3 P.M with the whole Cooke family. He reports that he found Mary in violent spasms. It seems that she was taken with spasms about 2 o'clock on Mond. morn and up to the time he left Stockton was still unconscious. Drs. Beede and Giesea were in attendance and the spasms were being relieved. Mrs. Russem had been called as nurse. Susie and Ida would not leave her till she was better. Ada and the little ones are well but weary. Just after dark, Susie and Ida arrived home. Mary had had a little dead babe taken from her and was more comfortable, though still unconscious. It was born tree months before time, and the doctors said they judged it had been dead for two months. This was the cause of the spasms, and she may not recover. I would like to go to see her at once, but their house is a cold and uncomfortable one, and they assure me all will be done for her that can be done. I have written to Willie. (T.S.R. 37. 2 P.M. 68. S.S. 60.)

Nov. 16. Wednesday. Sat down and wrote to Mary this morn. Ada's little Alma does not resemble little Winnie much. She is a bright little babe of six months. Weldon does not seem well. He looks so delicate by the side of Ida's children, who are so fat and have such red cheeks. Weldon grows tall, but is pale and thin. (T.S.R. 39. 2 P.M. 68. S.S. 60.)

Nov. 17. Thursday. Wrote to Horace and received a postal from Mr. Moore saying Mary is better. Alice, Hannah and Mr. Pascoe went to Stockton today and called to see them. Mary did not come to consciousness till last night. Was unconscious over two days. It was indeed severe. (T.S.R. 42. 2 P.M. 71. S.S. 65.)