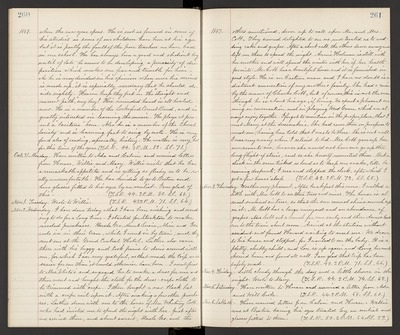 1887. when the new year opens. He is not as forward in some of his studies as some of our children have been at his age but it is partly the fault of the poor teachers we have had in our school. He has always been a good and obedient boy until of late he seems to be developing a perversity of disposition which makes me fear and tremble for him. As he is very decided in his opinion when once his mind is made up, it is especially necessary that he should decide rightly. Heaven keep thy feet in the "straight and narrow path," my boy! His wounded hand is all healed now. He is a member of the Lockeford Cornel Band, and is greatly interested in learning the music. He plays at present a "baritone" horn. Also he is a member of the Choral Society and is learning fast to sing by note. He is very fond also of reading, especially history. The weather is very hot for this time of the year. (T.S.R. 44. 2 P.M. 82. S.S. 71.)

Oct. 31. Monday. Have written to Ada and Calvin and received letters from Horace, Willie and Mary. Willie writes that he has a remarkable appetite and is getting so fleshy as to be really uncomfortable. He has decided to go to Boston and have glasses fitted to his eyes by an oculist. I am glad of this. (T.S.R. 44. 2 P.M. 80. S.S. 68.)

Nov.2.Wednesday. I have done today what I have been wishing and needing to do for a long time - I started for Stockton to make needed purchases. Uncle Geo. Aunt Susie, Alice and Ida rode in in their team, while I went in by train, and they met me at the Grand Central Hotel. Luther also came there with his buggy and took pains to drive around with me, for which I am very grateful, as that made the trip much easier for me than it would otherwise have been. I went first to Mrs. White's and engaged her to make a dress for me and then went and bought the cloth for the dress - crepe cloth to be trimmed with crepe. I then bought a new black hat with a crepe veil upon it. After making a few other purchases, Luther drove with me to the house of Mrs. Whitney Cobb, who had invited me to spend the night with her. Just after we arrived there, and about sunset, Uncle Geo. and the

1887. others mentioned, drove up to call upon Mr. and Mrs. Cobb. They seemed delighted to see us, and treated us to wedding cake and grapes. After a short call, the others drove away and left me there to spend the night. Annie Holman is still with her mother and will spend the winter with her, if her health permits. Mr. Cobb has a beautiful house and it is furnished in good style. He is an Eastern man and I have no doubt is a distant connection of my mother's family. She had a cousin by the name of Charles Cobb, but of course, this is not the man thought he is about his age, if living. We spent a pleasant evening in conversation, and in playing Word Game, which we always enjoy together. I forgot to mention in the proper place, that I met Mary at the dressmaker's. She had come there on purpose to meet me, having been told that I was to be there. She is not well. I was very weary when I retired to bed. Mrs. Cobb gave up her own room to me, because she would not have me go up the long flight of stairs, and so she herself mounted them. But a clock in the room ticked so loud as to keep me awake, til,becoming desperate, I rose and stopped the clock, after which I got a few hours' sleep (T.S.R. 42. 2 P.M. 72. S.S. 65.)

Nov. 3. Thursday. Weather very pleasant. After breakfast this morn. I walked a little with Mrs. Cobb to see their trees and vines. The house is almost enclosed in trees, so that the sun cannot shine much up on it. Mr. Cobb has a large vineyard and an abundance of grapes. Mrs. Cobb set a lunch for me early and then Annie took me to the train about noon. Arrived at the station without accident and found Howard waiting to meet me. We drove to his house and stopped, for I wanted to see the baby. It is a pretty, chubby child, and Lou is up again and doing her work. Arrived home and found all well. I am glad that trip has been safely made. (T.S.R. 42. 2 P.M. 71. S.S. 66.)