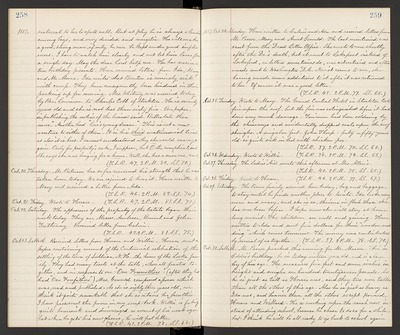 1887. natural to her to spell well. But at play he is always a leader among boys, and very decided and energetic. He will make a good, strong man, if only he can be kept under good influences. I have to watch him closely and not let him loose for a single day. May the dear Lord help me. He has received ten birthday presents. Have received letters from Ida, May and Mr. Moore. Ida writes that Benton is seriously sick with cough. They have consequently been hindered in their packing up for moving. Mrs. Whitney was married today by Rev. Lawrence to Charles Cobb of Stockton. He is seventy years old and she is not less than sixty five. One paper, in publishing the notice of the license said, "Better late than never." Another had "Love's young dream." This is not a new venture be either of them. It is his third matrimonial trial, as also it is hers. I cannot understand why she would marry again. Only for property's sake, I suppose, but O the complications. She says she was longing for a home. Well, she has a nice one, now. (T.S.R. 47. 2 P.M. 80. S.S. 70.)

Oct. 23. Sabbath. Received letters from Horace and Willie. Horace sent a paper containing account of the Centennial celebration of the settling of the town of Sullivan, N.H. the home of the Locke family. They had many toasts at the table, where all feasted together, and in response to one - "Our Foremothers"- (after they had had "Our Forefathers") Mrs. Gerould composed a poem which was read and published. As she is eightythree years old, we think it quite remarkable that she so retains her faculties. I have preserved the poem in my scrap-book. Willie is feeling quite homesick and discouraged on account of his work eyes, but when he gets his new glasses, he will feel better. (T.S.R. 41. 2 P.M. 78. S.S. 68.)

1887. Oct. 24. Monday. Have written to Calvin and Ada and received letters from Mr. Pascoe, Mary and Aunt Gerould. The last mentioned was sent from the Dead Letter Office. She wrote to me shortly after the Dr.'s death, but it went to Lakeport instead of Lockeford, as letters sometimes do, was advertised and afterwards sent to Washington, D.C. Now it comes to me, she having made some additions to it after it was returned to her. Of course it was a good letter. (T.S.R. 45. 2 P.M. 77. S.S. 65.)

Oct. 25. Tuesday. Wrote to Mary. The Grand Central Hotel in Stockton took fire upon the roof, but the fire was extinguished before it had done very much damage. Tinmen had been soldering by the chimneys and accidentally dropped coals upon the roof shingles. A singular fact- John Thorp - forty or fifty years old - is quite sick in bed with chicken-pox. (T.S.R. 37. 2 P.M. 70. S.S. 60.)

Oct. 29. Saturday. The Pascoe family arrived here today, bag and baggage, to stay until he finds another place to locate. Ida looks very worn and weary, and she is so, thinner in flesh than she has ever been before. I hope now she will stay at home long recruit. The children are well and growing. Have written to Ada and sent five dollars for their "wooden wedding" which comes tomorrow. The money was contributed by several of us together. (T.S.R. 37. 2P.M. 78. S.S. 70.)

Oct. 30. Sabbath. Mr. Pascoe preached this evening for Mr. Mason. This is Eddie's birthday - he is today sixteen years old and is a large boy of his age. He measures five feet and seven inches in height and weighs one hundred twentyseven pounds. So he is just as tall as Horace was, and They two were taller than all the others of this age. Also he is just as heavy as Ida was, and heavier than all the others except Howard, Horace and Willard. He is working upon the ranch now instead of attending school, because he chose to do so for a while, but I think he will be all ready to go back to school again