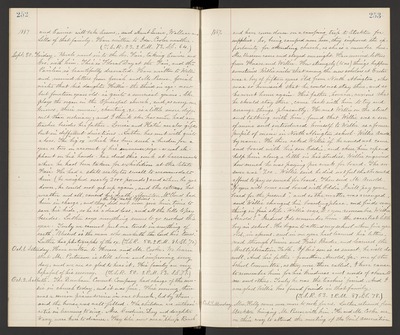 Sept. 30. Friday. Uncle went in to the Co. Fair, taking Eunice and Geo. with him. This is Floral Day at the Fair, and the Pavilion is beautifully decorated. Have written to Willie and received letters from Josiah and Mr. Pascoe. Josiah writes that his daughter Hattie - the third in age - now but fourteen years old - is quite a musical genius. She plays the organ in the Episcopal church, and, as every one knows, their music, chanting, &.c. is a little more difficult than ordinary, and I think she has never had any teacher besides her father. Louise and Katie are also gifted but in different directions. Luther has met with quite a loss. The "big ox" which has been such a burden for a year or two on account of his immense size - a real elephant on his hands - has died this week at Sacramento where he had been taken for exhibition at the State Fair. He had a stall really too small to accommodate him (he weighed nearly 3000 pounds) and when he got down, he could not get up again, and the extreme hot weather and all, caused his death. Moulton McCloud had him in charge, and they the City Health Officers did not even give him time to save his hide, so he is a dead loss, and all the bills to pay besides. Luther says everything seems to go crooked this year. Truly we cannot put our trust in anything of earth. "Blessed is the man who maketh the Lord his trust." Luther has photographs of the ox. (T.S.R. 50. 2 P.M. 81. S.S. 70.)

Oct. 2. Sabbath. The Dunham Concert Company had charge of the music in church today, and it was fine. This evening, there was a union praise service in our church, led by them, and the house was well filled. The children are enthusiastic in learning to sing. Mrs. Gardiner Day and daughter Wavy were here to dinner. They live now near "Sheep Ranch"

1887. and have come down on a camping trip to Stockton for supplies. So, being camped near here, they improved he opportunity for attending church, as she is a member here. Mrs. Russem came and stayed overnight. Have received letters from Horace and Willie. How strangely (to us) things happen sometimes. Willie writes that among the new scholars at Exeter was a boy of fifteen years old from North Abington, who was so homesick that he could not stay there, and so he went home again. His father, however, anxious that he should stay there, came back with him to try and arrange things pleasantly. He met Willie on the street and talking with him, found that Willie was a son of mine and introduced himself to Willie as a former pupil of mine in North Abington school - Willie Arnold by name. He then asked Willie if he would not come and board with his son Eddie, and cheer him up and help him along a little in his studies. Willie inquired how much he was paying per week for board. The answer was - $7.00. Willie said he did not feel that he could afford to pay so much for board. Then said Mr. Arnold, "If you will come and board with Eddie, I will pay your board for the present," and so the matter was arranged, and Willie changed his boarding place, and finds every thing in fine style. Willie says, "Do you remember Willie Arnold?" Indeed I do remember him - the smartest little boy in school. He began to attend my school when five yrs. old, in aprons, and in one year had learned his letters, read through Premier and First Reader, and learned the Multiplication Table. If his son is as smart, he will do well. And his father Jonathan Arnold, Jr. one of the School Committee, as they were then called, I have cause to remember him for his kindness and words of cheer to me and others. Truly he was the teachers' friend. And I am glad Willie has found friends in that family. (T.S.R. 53. 2 P.M. 87. S.S. 78.)

Oct. 3. Monday. Mrs. Kelly came once more to cook for us. Luther returned from Stockton bringing Mr. Pascoe with him. He and Mr. Cooke are on their way to attend the meeting of the Gen'l Association