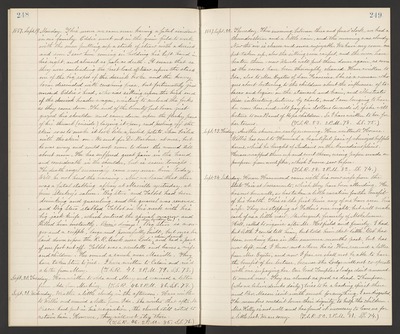 1887. Sept. 19. Monday. This morn we came near having a fatal accident in our family. Eddie went out in the grain field to work with the man putting out a stack of straw with a [?], and soon I saw him coming in holding his left hand in his right, and almost as pale as death. It seems that as they were unloading the first load of straw upon the stack, one of the big ropes of the [?] broke and the heavy boom descended with crushing force, but fortunately just [?] Eddie's head, who was sitting upon the high end of the header wagon, waiting to unload the focks as they came down. The end of the twenty foot boom just grazed his shoulder and came down upon the fleshy part of his thumb (inside) laying it open, and peeling off the skin so as to make it look like a peeled potato, when boiled with the skin on. We sent for Dr. Barbour at once, but he was away and could not come to dress the wound till about noon. He has suffered great pain in the hand and considerable in the shoulder, but is easier tonight. The death angel seemingly came very near him today. Will he not heed the warning. Now we learn that there was a fatal stabbing affray at Macville yesterday, at Jum Starkey's saloon. "Big Steve" and Talbot had been drinking and quarreling, and the quarrel was renewed and Big Steve stabbed Talbot in his neck with his big jack-knife, which entered the spinal marrow and killed him instantly. Rum'o doings! And on Sunday too! Big Steve is a negro and a cripple, large and powerfully built, but once he laid down upon the R.R. track near Lodi when drunk and had a part of our foot cut off. Talbot was a mulatts and leaves a wife and children. He owned a ranch near Macville. They have taken Steve to jail. I have written to Calvin and rec'd a letter from Mary. (T.S.R. 41. 2 P.M. 79. S.S. 73.)

Sept. 21. Wednesday. Weather a little cloudy in the afternoon. Have written to Willie and received a letter from Ida. She writes that after Mr. Pascoe had put in his resignation, the church still noted to retain him. However, they will not stay there. (T.S.R. 46. 2 P.M. 85. S.S. 76.)

1887. Sept. 22. Thursday. This morning, between three and four o'clock, we had a thunderstorm and a little rain, and the morning was cloudy. Now the air is clearer and more enjoyable. We have my room carpet taken up, also the sitting room carpet, and the men have beaten them - now Uncle will put them down again, as soon as the rooms have been thoroughly cleaned. Have written to Ida, also to Mrs. Eyster of San Francisco. She is a woman who goes about lecturing to the children about the influence of tobaceo and liquor on the stomach and brain, and illustrates these interesting lectures by charts, and I am longing to have her come here, and will pay five dollars towards it, if she will lecture to our Band of Hope children. So I have written to her for her terms. (T.S.R. 53. 2 P.M. 78. S.S. 75.)

Sept. 23. Friday. Another shower in early morning. Have written to Horace. Willie has sent to Hannah a beautiful pair of ebonized buffalo horns, which he bought of Indians on the Canadians plains. Horace wrapped them up and sent them, using paper made on purpose from word fibre, which I never saw before. (T.S.R. 58. 2 P.M. 82. S.S. 74.)

Sept. 24. Saturday. Horace Hammond came with his new wife from the State Fair at Sacramento, which they have been attending. He has not been well, so has taken a little vacation for the benefit of his health. This is the first time any of us have seen his wife. They are stopping at Father's overnights, but will make each of us a little visit. Mr. Sargent, formerly of Mokelumne Hill, called to inquire after Mr. Hetfield and family. I had but little I could tell him, but told him that little. Bob has been working here in the summer months past, but has now left, and I know not where he is. Have received a letter from Mrs. Eyster, and now I fear we shall not able to have the benefit of her lecture, because the Lodge will not co-operate with me in paying her. Our Good Templar's lodge don't amount to much now. They are almost as good as dead. Thompson, (who we believe drinks daily) tries to be a leading spirit there and Rev. Mason isn't worth much for anything. I am disgusted. The members couldn't lower their dignity to help the children. Mrs. Kelly is not well and has found it necessary to leave us for a little rest. We are sorry. (T.S.R. 50. 2 P.M. 81. S.S. 74.)